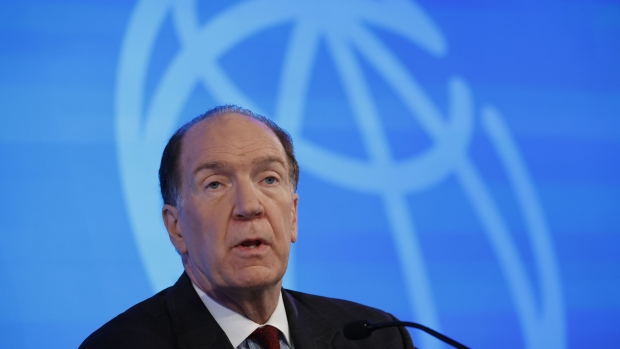 David Malpass, president of the World Bank Group, speaks at a news conference during the annual meetings of the International Monetary Fund (IMF) and World Bank in Washington, DC, US, on Thursday, Oct. 13, 2022. The IMF this week warned of a worsening outlook for the global economy, highlighting that efforts to manage the highest inflation in decades may add to the damage from the war in Ukraine and China's slowdown. , Bloomberg

(Bloomberg) -- China’s actions in talks among countries that lent money to Zambia are delaying a restructuring of the African nation’s debt, and Beijing needs to move on from unfeasible demands, the head of the World Bank said.

“China is asking lots of questions in the creditors committees, and that causes delays, that strings out the process,” David Malpass, the president of the Washington-based development lender, said in an interview with Bloomberg TV’s Kathleen Hays and Paul Allen.

“It’s important for them to be focused on getting to an actual debt restructuring where the burden can be lightened for Zambia,” he said, adding that progress may be possible in the next couple of months.

Malpass spoke after meeting last month with officials from China Development Bank and Export-Import Bank of China, the nation’s two largest lenders to poor countries. US Treasury Secretary Janet Yellen and Kristalina Georgieva, the head of the IMF, also visited Zambia this week to try to expedite a deal.

Yellen urged Zambia’s creditors to work quickly to restructure the southern Africa nation’s debts, and accused China of obstructing a deal. The Chinese Embassy in Lusaka, Zambia’s capital, responded by urging the US to stop sabotaging unspecified sovereign nations’ efforts to solve their debt issues.

Zambia became Africa’s first pandemic-era sovereign defaulter in 2020, and since then has been struggling to revamp external debt that topped $17 billion, more than a third of which is held by Chinese creditors.

Beijing wants multilateral development banks to take losses in restructurings, including in Zambia’s case, a senior US Treasury official said this week. But forcing lenders such as the International Monetary Fund and World Bank, which offer concessional loans to participate in debt treatments, would undermine their standing and ability to continue their work, the person said.

“There’s not a mechanism to do that,” he said of the lenders taking losses. “That’s been discussed actively at the G-20 and rejected as a direction, so I hope they’ll move on from that.”

The IMF’s Georgieva said earlier on Tuesday that the lender of last resort will proceed with its first review of Zambia’s financed program this quarter and should be able to make a scheduled second disbursement. She expressed confidence that Zambia’s creditor committee, co-chaired by China and France, will be able to sign a restructuring deal with the government by April 1.

--With assistance from Kathleen Hays and Paul Allen.

(Updates with additional comments from Malpass starting in second paragraph.)