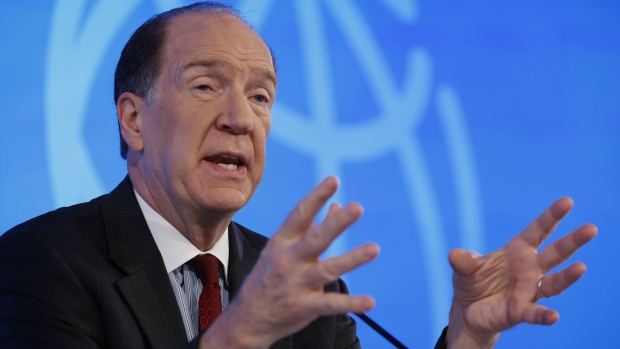 David Malpass, president of the World Bank Group, speaks at a news conference during the annual meetings of the International Monetary Fund (IMF) and World Bank in Washington, DC, US, on Thursday, Oct. 13, 2022. The IMF this week warned of a worsening outlook for the global economy, highlighting that efforts to manage the highest inflation in decades may add to the damage from the war in Ukraine and China's slowdown. , Bloomberg

(Bloomberg) -- World Bank Group President David Malpass said that he’s concerned about the absence of an effective global system to deal with debt defaults in low-income countries and that he is also worried about growing debt in richer ones.

“I’m worried about a disorderly default process -- where there’s not a system to really address that for the poor countries,” Malpass said at an event hosted by Reuters on Thursday. “We also have to really address -- for the advanced economies -- this giant buildup of debt. And so as the interest rates go up, the debt service goes up for the advanced economies, and that requires a big amount of capital from the world.”

The heads of the world’s biggest international finance institutions have long sounded the alarm about record global debt levels, particularly as monetary authorities have had to raise interest rates to quell accelerating inflation.

The World Bank operates the International Development Association, a platform to fight extreme poverty in the 74 poorest nations. Together, those countries will owe their creditors about $62 billion this year, about 35% more than in 2021, Malpass said.

While donor nations such as the US provide money to help the IDA, it isn’t sufficient to cover the costs, presenting “a giant challenge,” the World Bank chief said. About 66% of bilateral credit in IDA is owed to China, he said.

China -- the world’s biggest creditor to developing countries -- has come under criticism for its perceived lack of engagement in a global effort to reduce debt burdens for developing nations, with US Treasury Secretary Janet Yellen saying on multiple occasions that Beijing has become the biggest obstacle to progress.

The Group of 20 nations has set up a so-called Common Framework that brings the Paris Club of traditional rich debtor countries together with China to try to restructure the debts of low-income countries on a case-by-case basis. Only three nations -- Chad, Ethiopia and Zambia -- signed up, and after almost two years of talks, Chad became the first to find resolution earlier this month.

“Some of the countries have been waiting two years in order to even get started on on a debt-restructuring process, so there’s responsibility on the world to have a process that works better and a responsibility on China to engage with the process,” Malpass said.

Malpass added that he will join International Monetary Fund Managing Director Kristalina Georgieva on a trip to China next week, where the duo plans to engage authorities in Beijing on debt issues.