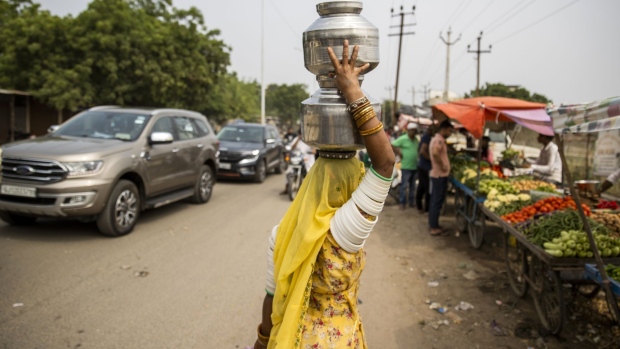 A customer shops at the Saturday Market in Kandla, India, on Saturday, Sept. 10, 2022. India is scheduled to announce its CPI figures on Sept. 12. , Bloomberg

(Bloomberg) -- The World Bank cut India’s economic growth forecast by a full percentage point, the most for a non-crisis economy in South Asia, citing risks from a global slowdown and the hit to demand from rising interest rates.

India’s gross domestic product will grow 6.5% in the year to March, the Washington-based institution said in its South Asia Economic Focus report released Thursday. That revision, along with a 1.4 percentage point cut to crisis-ridden Sri Lanka’s growth outlook, pulled the region’s 2022 forecast down to 5.8% from 6.8% seen in June, even though the outlook for five other countries in the region were upgraded.

The view on India is sharply lower than the estimate of the Reserve Bank of India, which cut its forecast last month to 7% from 7.2%. While warning that the region faces an unprecedented combination of shocks on top of the lingering scars of the pandemic, the World Bank said some nations were coping better than others, citing the resilience of India’s exports and services sectors.

“The spillovers from the Russia-Ukraine war and global monetary policy tightening will continue to weigh on India’s economic outlook,” the World Bank said. Elevated inflation and rising borrowing costs will affect domestic demand, while slowing global growth will hurt the nation’s exports, it said.

While India’s economy posted double-digit growth in the April-June quarter, the RBI’s aggressive monetary policy tightening is seen as a risk to demand in an economy where consumption accounts for some 55% of growth.