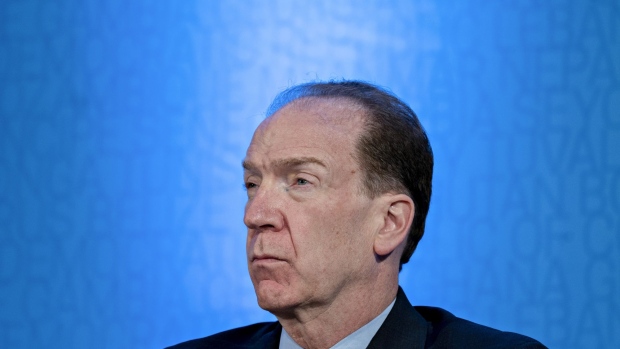 (Bloomberg) -- World Bank President David Malpass said he hasn’t considered resigning and isn’t under pressure from member countries to do so, after critics slammed him for dodging questions on whether he accepted the scientific consensus that the burning of fossil fuels is driving global warming.

Malpass, speaking Friday at an event hosted by Politico, said he “really wasn’t prepared” for the line of questioning Tuesday when former Vice President Al Gore labeled Malpass a “climate denier” and Malpass said he was “not a scientist.”

“It was a poorly chosen line,” the World Bank chief said Friday. “I regret that because we as an organization are using the science every day in terms of finding the most impactful projects.” Malpass said he’d be happy to meet with climate scientists to receive training on the issue.

Asked about his meetings with representatives of World Bank member countries since the Tuesday event, Malpass said “none” asked him to quit.

Malpass, 66, who was nominated to the post in 2019 by then-President Donald Trump, has been in damage-control mode since that event. His remarks raised eyebrows within the Biden administration and sparked renewed criticism of both the bank and its chief. Environmental activists had already been calling on the World Bank and other multilateral lenders, including the International Monetary Fund, to do more to accelerate clean-energy ventures and halt funding for fossil-fuel projects.

In an interview Thursday with CNN International, Malpass said, “it’s clear that greenhouse gas emissions are coming from man-made sources.” He also sent a message to World Bank staff, seen by Bloomberg, stating that “the sharp increase in the use of coal, diesel and heavy fuel oil in both advanced economies and developing countries is creating another wave of the climate crisis.”

He reiterated those messages Friday.

“It’s clear that greenhouse gas emissions from human activity are adding to, are causing climate change,” Malpass said at the Politico event. “And so the task for us, for the world, is to pull together the projects and the funding that actually has an impact.”

The US is the World Bank’s biggest shareholder and most influential voice when it comes to choosing the bank’s leadership. The White House disagrees with Malpass’s comments earlier this week, Press Secretary Karine Jean-Pierre said. She refused to answer multiple questions about whether Biden has confidence in Malpass to lead the bank.

“We expect the World Bank to be a global leader of climate ambition and mobilization, as well of significantly more climate finance for developing countries as is the business of the World Bank,” Jean-Pierre told reporters Friday. “The Treasury Department, which oversees our engagement with international financial institutions, has and will continue to make that expectation clear to the World Bank leadership.”

The Union of Concerned Scientists on Friday called for Malpass to be replaced immediately.

“The World Bank is a critical institution serving low-income countries,” UCS President Johanna Chao Kreilick said. “People living in the global south deserve to have the World Bank led by a fierce climate advocate, not someone who hasn’t spent enough time with the bank’s deep bench of scientists and experts to understand the most basic facts about the causes of climate change.”

Malpass said the World Bank is “by far the leading financier of climate action in the developing world,” with the lender concluding $32 billion of climate-related financing in its 2022 fiscal year.

Transitioning from coal-fired power to renewables involve multi-year plans where workers need to be retrained and land needs repurposing, he said, adding that the bank is “leading the world” in that process.