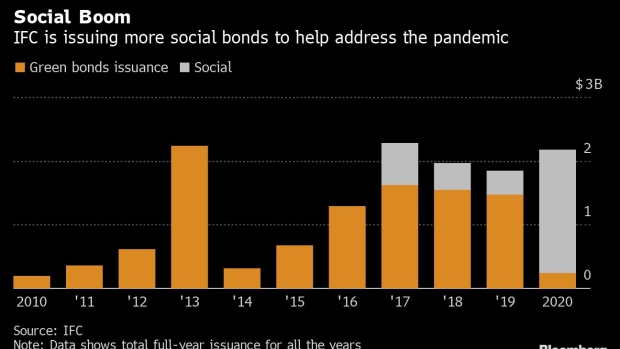 (Bloomberg) -- International Finance Corp. is on track to sell a record amount of environmental and social bonds as part of its global response to the pandemic.

The World Bank Group’s arm for the private sector expects its sustainable bond sales this year will likely surpass the previous high of $2.3 billion it set in 2017, according to John Gandolfo, vice president and treasurer at IFC. Issuance will come in different currencies, and proceeds will to go to clients globally, including small businesses, low-income households and poor and fragile nations, he said.

“IFC is certainly focused on, first and foremost, its response to the pandemic and saving jobs, lives, livelihoods and also building a path to a resilient recovery,” said Gandolfo in an interview.

It raised about $2.2 billion in debt tied to environment, social and governance last year, including a record $1.9 billion in social bonds. One key area of focus this year is vaccine campaigns, especially in emerging markets where distribution has been slow compared to developed nations, he said.

IFC said it has already raised $440 million in social bonds across five different currencies in its current fiscal year, which runs July 1 to June 30. That included its first bond swapped from fixed-rate to the new Secured Overnight Financing Rate benchmark interest rate. The organization is also looking to issue social bonds in additional currencies to reach more investors.

Companies, sovereigns, supra-nationals and agencies ramped up issuance of social bonds last year to support relief efforts at the height of the pandemic. Sales of the debt jumped sevenfold to $147.7 billion in 2020 amid strong investor demand and IFC estimates as much as $200 billion this year, said Gandolfo.

IFC priced its largest social bond -- a $1 billion deal -- on March 11, the same day the World Health Organization declared the virus a global pandemic and financial markets endured their worst turmoil in a decade. The note sale was 3.4 times oversubscribed, according to IFC, with nearly half of the deal bought by Asia-Pacific investors. The huge demand helped the AAA-rated issuer see a pricing benefit of 1 basis point to 2 basis points.

The organization, which works with more than 2,000 businesses worldwide, delivered $22 billion in long-term financing for developing countries in fiscal year 2020, according to its social bond impact report. Sustainable bonds contribute about 20% of IFC’s funding program.

“There’s going to be a lot of financing related to the pandemic that still is left to come,” said Gandolfo.