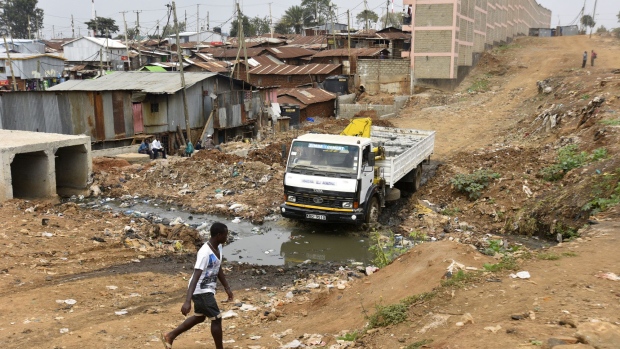 A truck transports bricks for the construction of new homes for slum dwellers in the Kibera slum in Nairobi, Kenya, on Friday, July 21, 2017. Kenya, East Africa’s biggest economy, has faced questions about the credibility of its past two elections, with a dispute over the outcome of a presidential vote in December 2007 triggering two months of ethnic violence that left at least 1,100 people dead. Photographer: Riccardo Gangale/Bloomberg , Bloomberg

(Bloomberg) -- Poverty levels in Kenya should resume their pre-coronavirus pandemic decline as the nation’s economy continues to rebound, according to the World Bank.

The proportion of the population living on less than $2.15 a day is expected to fall to 25.8% this year, from 26.7% in 2021, the Washington-based lender said in its Kenya Economic Update released Thursday. That would be lower that the 26.5% recorded in 2019 before the pandemic struck.

“Real per-capita incomes are expected to grow and the decline in poverty is expected to resume its pre-pandemic trend,” the bank said.

The release of the report comes as President William Ruto, who took office three months ago, begins to implement his so-called bottom-up economic model. It aims at allocating resources to programs that have the most potential to create jobs and boosting household incomes.

The World Bank warned that consumption growth is likely to be dampened in the near-term due to below-average harvests, high inflation and tighter monetary policy. It noted that about 52% of households had cut back consumption, 35% bought less food and 10% sold productive assets in the first half of this year.

The Central Bank of Kenya has increased interest rates by a cumulative 175 basis points in 2022, the most in seven years, in a bid to bring price-growth back to within its 2.5% to 7.5% target band in early 2023. The inflation rate has exceeded the upper end of that range since June.

The World Bank projects that Kenya’s economy will grow 5.5% this year and by an average of 5.2% over the next two years as private investment increases. That’s unchanged from the lender’s previous forecasts in June.

The report noted that less than 5% of agriculture is irrigated and that farming has suffered from increasing variability in rainfall and climate change. The sector, which accounts for almost one-fifth of Kenya’s gross domestic product and is central to employment and poverty reduction, was the only one to have contracted last year, data from the nation’s statistics agency show.

The Kenyan shilling has remained under pressure from increased imports and the erosion of foreign-exchange reserves, which made servicing of debt more difficult, according to the World Bank.