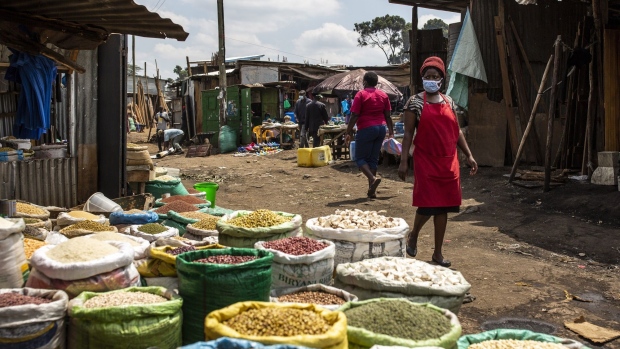 A vendor wearing a protective face mask walks by bags of beans and pulses for sale at Toi market in Nairobi, Kenya, on Tuesday, May 26, 2020. Kenya plans to spend 53.7 billion shillings ($503 million) on a stimulus package to support businesses that have been hit by the coronavirus pandemic, according to the National Treasury. Photographer: Patrick Meinhardt/Bloomberg , Bloomberg

(Bloomberg) -- Sub-Saharan Africa will probably reverse an economic contraction next year as countries in the region begin to ease movement restrictions, even as the impact of the coronavirus will endure for years to come, according to the World Bank.

The pandemic has put “a decade of hard-won economic progress at risk,” the Washington-based lender said Thursday in its outlook for the region.

Sub-Saharan Africa’s gross domestic product is on track to shrink 3.3% this year, its worst performance on record, due to the combined effects of the disease and lower oil and commodities prices. Growth of about 2.1% could follow in 2021 and 3.2% in 2022, the bank said.

Still, the fallout of the pandemic remains hard to predict.

The lender’s baseline scenario assumes that the number of new infections will continue to slow and that fresh outbreaks won’t result in new lockdowns. If the outbreak is more prolonged or if there’s a second wave, sub-Saharan Africa’s economy may expand by only 1.2% in 2021 and 2.1% in 2022. By the end of 2021, the region’s real per-capita GDP may have regressed to 2007 levels, according to the report.

That’s likely to lead to long-term output losses “with the level of real per-capita GDP expected to contract by 2.1% and 5.1%,” confirming earlier forecasts that sub-Saharan Africa will suffer its first recession in a quarter of a century in 2020.

To give Africa’s poorest countries some breathing room, the World Bank and the International Monetary Fund have proposed suspending debt servicing this year. However, that would address only a fraction of total debt, and debt relief from private creditors is likely needed as well, the bank said.