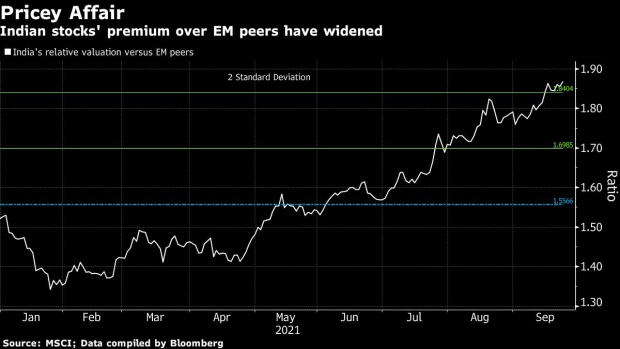 A pedestrian walks past the Bombay Stock Exchange (BSE) building in Mumbai, India, on Wednesday, May 26, 2021. Money managers are counting on a consumption-led economic rebound from the world's worst coronavirus outbreak and the nation's long-term growth prospects to support corporate earnings and equity valuations. , Bloomberg

(Bloomberg) -- India’s main stock indexes surged to unprecedented levels as investors bet that earnings for companies in Asia’s third-largest economy will improve amid speedy vaccinations and an easing pandemic.

The S&P BSE Sensex topped the 60,000-level for the first time on Friday and the NSE Nifty 50 Index neared the 18,000-mark. The Sensex has more than doubled from its pandemic lows hit March 2020, to become one of the best performers among major markets.

The world-beating stock rally is fueled by millions of first-time investors, willing to buy riskier assets as the central bank’s record-low policy rates reduce returns from traditional saving avenues like bank deposits. Global funds are riding the wave, having poured nearly $9 billion into Indian stocks this year, compared with $1.8 billion in Indonesia and outflows from countries like South Korea and Malaysia.

New infections in India have held steady since about July, with the bulk of cases coming from just two states. Moreover, the pace of vaccinations has picked up, with almost 45% of people in the world’s second-most-populous country having received at least one dose and 15% fully vaccinated.

Most states have lifted lockdown curbs, improving prospects for businesses’ demand and profits ahead of the key festival season starting next month. Earnings for India’s top 50 companies are estimated to rise 27% in the current financial year.

The blistering rally has brought valuations back at the center of the debate over how far Indian stocks can go from here. The Nifty is trading at close to 23 times its estimated 12-month earnings, well above its five-year average of about 18 times, and much higher than the MSCI Emerging Market Index’s multiple of 13. Risks are also rising for the economy; a retreat for the Nifty 50 Index would reduce gross domestic product by 1.4% in the same quarter of the shock and by 3.8% over the following year, Ankur Shukla, an economist with Bloomberg Economics, wrote in a recent note.