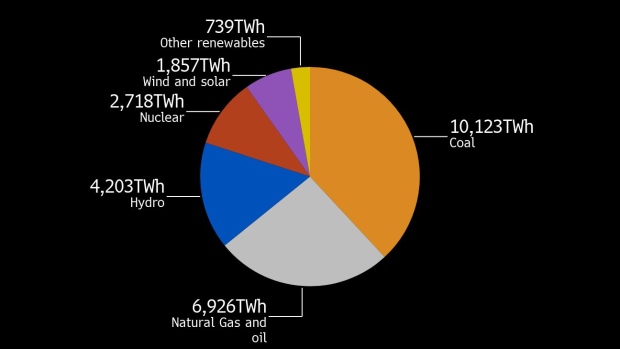 (Bloomberg) -- The world’s attempts to quit coal are failing. Whatever rich nations do to move away from the dirtiest fossil fuel, those efforts are being outpaced by developing Asian countries seeking a cheap and reliable source of power.

Global coal demand rose for a second consecutive year in 2018, the International Energy Agency said in its World Energy Outlook, which plots different scenarios of future energy use. Three quarters of that demand was in the Asia Pacific region.

If global coal policies remain unchanged, then demand will keep expanding for two decades, the IEA said. However, growth will plateau in that period if countries implement the promises they have already made, the Paris-based agency said.

Coal’s demise in the developed world has been driven by climate change concerns and sped up by the Paris Agreement, as nations battle to contain global warming. The U.K. will stop burning coal for power by 2025, Germany is planning for an end to coal by 2038 while in the U.S demand fell to a 39-year low in 2018.

If all governments implement policies to squeeze out the fuel, which accounted for 38% of the world’s energy mix last year, then by 2040 its share would contract to about 10%, the IEA said.

To contact the editors responsible for this story: Reed Landberg at landberg@bloomberg.net, Stuart Wallace, Helen Robertson