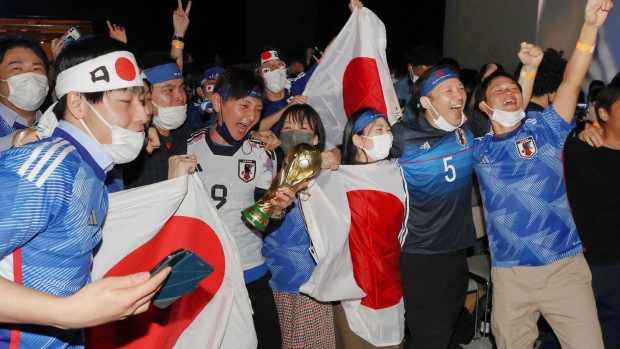 Fans celebrate after Japan's victory over Spain in the Qatar 2022 World Cup Group E football match to advance to the last 16, at a public viewing area in Tokyo on December 2, 2022. Photographer: JIJI Press/AFP/Getty Images , Photographer: STR/AFP

Viewers of the Japan-Croatia match were advised halfway through the contest that access for new streamers would be restricted in order to ensure a stable service.

Abema holds the Japan streaming rights to the Qatar tournament, and the national team’s unexpected progress out of the group stage triggered a wave of interest and support. The youth-oriented streaming network showed more than 23 million viewers during the latest knockout-stage match, surpassing the previous high set on Friday after Japan’s game against Spain, which was broadcast at 4 a.m. locally.

CyberAgent surged 4% on the news Friday, which augured well for its investment in the loss-making service. Shares fell 0.5% on Monday.

“CyberAgent’s stock is rising on expectations that Abema will see its revenue from ads increase over the long-term,” said Hideki Yasuda, an analyst at Toyo Securities.

Tokyo-based CyberAgent is better known for its portfolio of video games, such as Uma Musume, which helped drive the stock to a record high amid the pandemic. It may have spent as much as 20 billion yen ($150 million) on securing the World Cup streaming rights for Abema, according to Jefferies analyst Hiroko Sato. Its broadcasts also feature former national footballer Keisuke Honda as a commentator. The service can be watched on phones, PCs and connected TVs. Japanese fans also have the option to watch via a regular broadcast on Fuji TV.

Though overwhelmingly popular, the Abema live streams are free to watch and analysts question how much of the current surge the company will be able to convert into paying users. Abema registered more than 17 million viewers on Friday, CyberAgent said. CyberAgent has added extra servers to handle World Cup demand and anticipates making a loss on the tournament, a spokesperson said.

“I expect most viewers who installed the app for the soccer games will delete it after the tournament’s over and return to other TV and streaming services, such as Netflix and YouTube,” Yasuda said.

--With assistance from Yuji Okada.