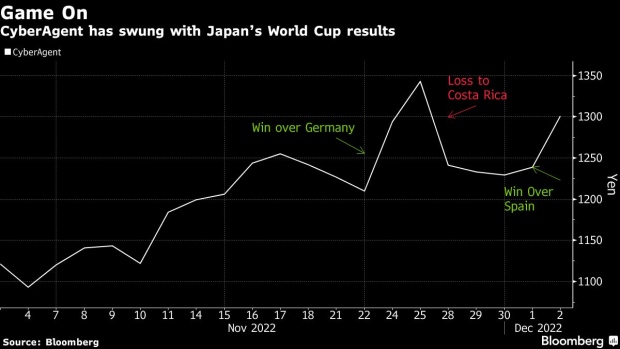 (Bloomberg) -- Some stocks related to sports and entertainment climbed in Tokyo after Japan’s surprise defeat of Spain to advance to the next round of the World Cup in Qatar.

Shares of CyberAgent Inc., which is broadcasting all the games for free in Japan on its Abema streaming service, jumped as much as 7.3%. Sporting goods maker Mizuno Corp. gained as much as 5.3%, while small-cap pub chain operator Hub Co. surged as much as 15%.

“The World Cup and soccer-related theme is a short-term idea,” said Hideyuki Suzuki, general manager at SBI Securities Co. But longer term, “the number of children who want to play soccer may increase, and we can envision a scenario in which technology is gradually integrated into sports,” including metaverse applications.

Japan emerged at the top of Group E with a 2-1 win over Spain, a perennial powerhouse that won the World Cup in 2010. The result was Japan’s second win of the group stage, after another upset over Germany.

Advancing to the knockout stage for the second-straight World Cup, Japan will play Croatia next week. Croatia is No. 12 in FIFA world rankings, while Japan is at No. 24.