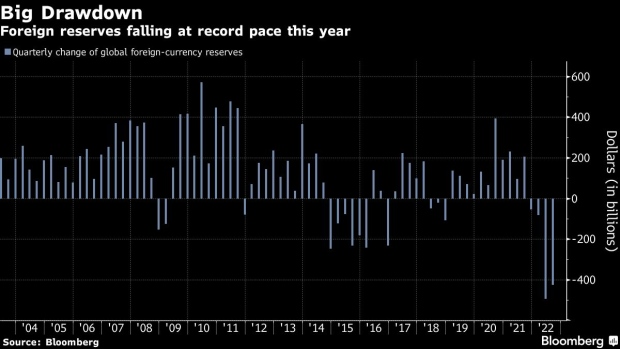 Indian rupee banknotes at a general store in Mumbai, India, on Wednesday, July 20, 2022. The rupee slid to all-time low of 80.06 per dollar on Tuesday, and has lost 2.4% over the past month, the third-worst performing Asian currency over the period. Photographer: Dhiraj Singh/Bloomberg , Bloomberg

(Bloomberg) -- Global foreign-currency reserves are falling at the fastest pace on record, as central banks from India to the Czech Republic intervene to support their currencies.

Reserves have declined by about $1 trillion, or 7.8%, this year to $12 trillion, the biggest drop since Bloomberg started to compile the data in 2003.

Part of the decline — more than half according to estimates from Steven Englander, Standard Chartered Plc’s global head of G-10 foreign-exchange research — was due to valuation changes. As the dollar jumped to two-decade highs against other reserve currencies, like the euro and yen, it reduced the dollar value of the holdings of these currencies. But the dwindling reserves also reflect the stress in the currency market that is forcing a growing number of central banks to dip into their war chests to fend off the depreciation.

India’s stockpile, for example, has tumbled $96 billion this year to $538 billion. The country’s central bank said asset valuation changes account for 67% of the decline in reserves during the fiscal year from April, implying the rest came from intervention to prop up the currency. The rupee has lost about 9% against the dollar this year and hit a record low last month.

Japan spent about $20 billion in September to slow the yen’s slide in its first intervention to support the currency since 1998. That would account for about 19% of the loss of reserves this year. A currency intervention in the Czech Republic helped drive down reserves there by 19% since February.

“This is all part of the catalog of symptoms of the canary in the coal mine,” said Axel Merk, chief investment officer at Merk Investments, of the declining reserves. “Cracks are showing up. And those red flags will come at an increasing pace.”

While the magnitude of the decline is extraordinary, the practice of using reserves to defend currencies isn’t anything new. Central banks buy dollars and build up their stockpiles to slow currency appreciation when foreign capital floods in. In bad times, they draw on the reserves to soften the blow from capital flight.

Most central banks still have enough fire power to keep interventions going, if they chose to. Foreign reserves in India are still roughly 49% higher than early 2017 levels, and enough to pay for nine months of imports. Central banks including those from Indonesia, Malaysia, China and Thailand will be releasing their latest foreign reserves data on Friday.

But for others, they are quickly depleting. After declining 42% this year, Pakistan’s $14 billion of reserves aren’t enough to cover three months of imports, data compiled by Bloomberg show.