Global activity could return to pre-pandemic levels by the end of 2021: Nobel Prize-winning economist

The world economy is on course for its fastest growth in more than a half century this year, yet differences and deficiencies could hold it back from attaining its pre-pandemic heights any time soon.

The U.S. is leading the charge into this week’s semi-annual virtual meeting of the International Monetary Fund, pumping out trillions of dollars of budgetary stimulus and resuming its role as guardian of the global economy following President Joe Biden’s defeat of “America First” President Donald Trump. Friday brought news of the biggest month for hiring since August.

China is doing its part too, building on its success in countering the coronavirus last year even as it starts to pull back on some of its economic aid.

Yet unlike in the aftermath of the 2008 financial crisis, the recovery looks lopsided, in part because the rollout of vaccines and fiscal support differ across borders. Among the laggards are most emerging markets and the euro area, where France and Italy have extended restrictions on activity to contain the virus.

“While the outlook has improved overall, prospects are diverging dangerously,” IMF Managing Director Kristalina Georgieva said last week. “Vaccines are not yet available to everyone and everywhere. Too many people continue to face job losses and rising poverty. Too many countries are falling behind.” 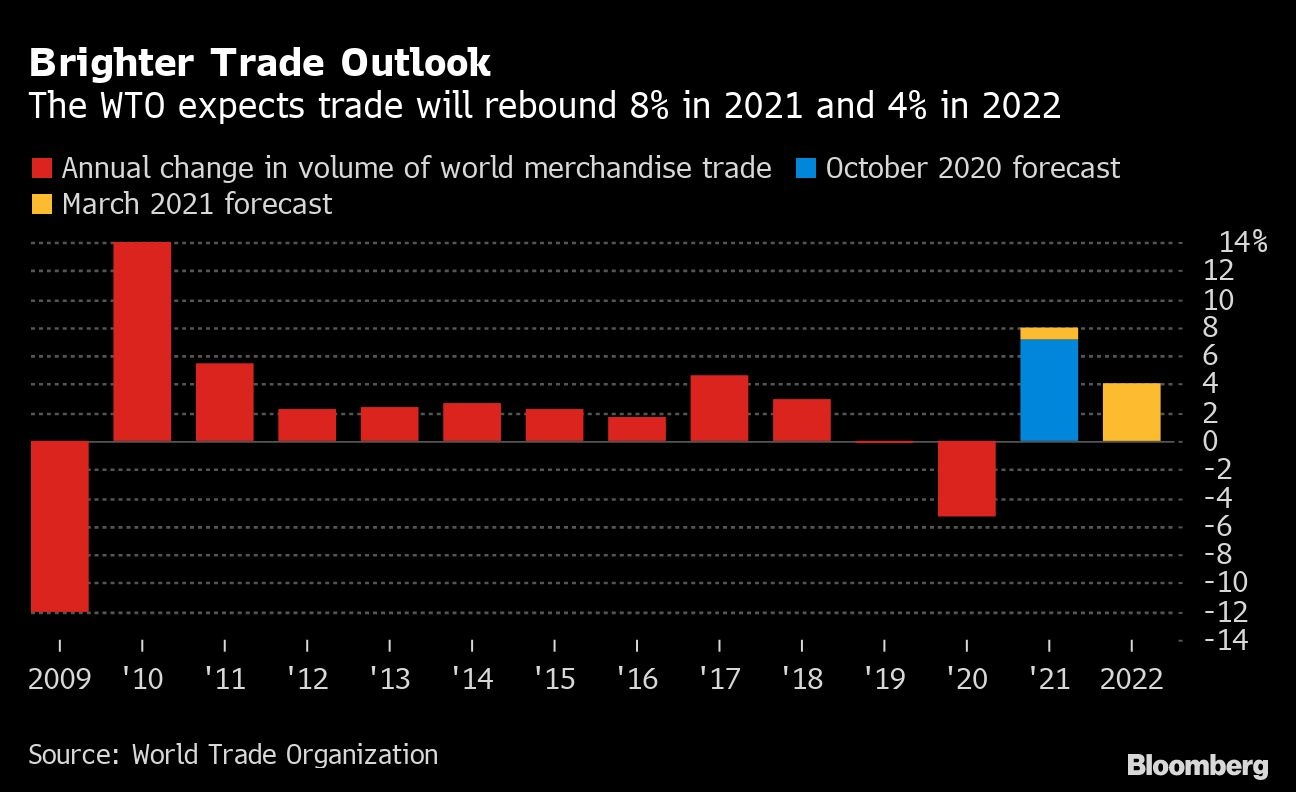 The result: It could take years for swathes of the world to join the U.S. and China in fully recovering from the pandemic. By 2024 world output will still be 3 per cent lower than was projected before the pandemic, with countries reliant on tourism and services suffering the most, according to the IMF.

The disparity is captured by Bloomberg Economics’ new set of nowcasts which shows global growth of around 1.3 per cent quarter on quarter in the first three months of 2021. But while the U.S. is bouncing, France, Germany, Italy, the U.K. and Japan are contracting. In the emerging markets, Brazil, Russia and India are all being clearly outpaced by China.

For the year as whole, Bloomberg Economics forecasts growth of 6.9 per cent, the quickest in records dating back to the 1960s. Behind the buoyant outlook: a shrinking virus threat, expanding U.S. stimulus, and trillions of dollars in pent-up savings.

Much will depend on how fast countries can inoculate their populations with the risk that the longer it takes the greater the chance the virus remains an international threat especially if new variants develop.

Bloomberg’s Vaccine Tracker shows while the U.S. has administered doses equivalent to almost a quarter of its people, the European Union has yet to hit 10 per cent, while rates in Mexico, Russia and Brazil are below 6 per cent. In Japan the figure is less than 1 per cent.

“The lesson here is there is no trade-off between growth and containment,” said Mansoor Mohi-uddin, chief economist at the Bank of Singapore Ltd.

Former Federal Reserve official Nathan Sheets said he expects the U.S. to use this week’s virtual meetings of the IMF and World Bank to argue that now is not the time for countries to pull back on assisting their economies.

It’s an argument that will be mostly directed at Europe, particularly Germany, with its long history of fiscal stringency. The EU’s 750 billion-euro (US$885 billion) joint recovery fund won’t start until the second half of the year.

The U.S. will have two things going for it in making its case, Sheets said: A strengthening domestic economy and an internationally respected leader of its delegation in Treasury Secretary Janet Yellen, no stranger to IMF meetings from her time as Fed Chair.

But the world’s largest economy could find itself on the defensive when it comes to vaccine distribution after accumulating massive supplies for itself. “We will hear a hue and cry emerge during these meetings for more equal access to vaccinations,” said Sheets, who is now the head of global economic research at PGIM Fixed Income.