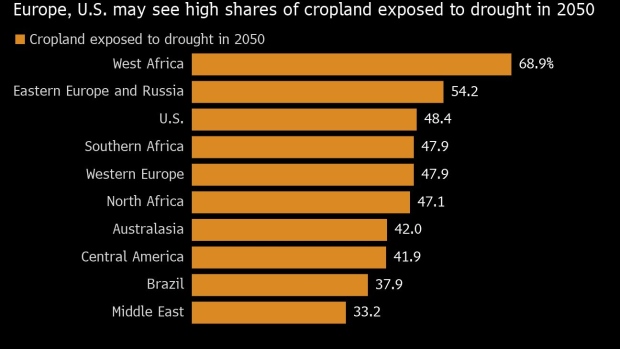 Farmhands sow rice saplings at a flooded paddy field in Karnal district, Haryana, India on Friday, June 26, 2020. From March through May, around 10 million migrant workers fled India’s megacities, afraid to be unemployed, hungry and far from family during the world’s biggest anti-Covid lockdown. Migrant workers aren’t expected to return to the cities as long as the virus is spreading and work is uncertain. Photographer: Prashanth Vishwanathan/Bloomberg , Bloomberg

(Bloomberg) -- Food supplies will struggle to keep pace with the world’s growing population as climate change sends temperatures soaring and droughts intensify, according to a report from Chatham House.

Yields of staple crops could decline by almost a third by 2050 unless emissions are drastically reduced in the next decade, while farmers will need to grow nearly 50% more food to meet global demand, the think tank said. The Chatham House report was drawn up for heads of state before next month’s pivotal United Nations COP26 climate summit in Glasgow.

Food prices are already near a decade high, fueled by supply chain disruptions during the pandemic and extreme weather. Wheat prices surged over the summer due to crop losses in some of the biggest exporters. The Chatham House report suggests climate challenges could keep that trend intact.

“We can expect all basic food staples to significantly increase in price,” the report’s lead author Daniel Quiggin said in an interview. “We would also expect there to be shortages in some reaches of the world.”

Thе proportion of cropland affected by drought will more than triple to 32% a year, the report said. It also predicts nearly 50-50 odds of a loss of 10% or more of the corn crop across the top four producing countries during the 2040s.

Major crops from wheat to soy and rice “are likely to see big yield declines” due to drought, and shorter growing periods, Quiggin said. Severe climate impacts will be “locked in” by 2040 if countries do not reduce emissions, according to the report.