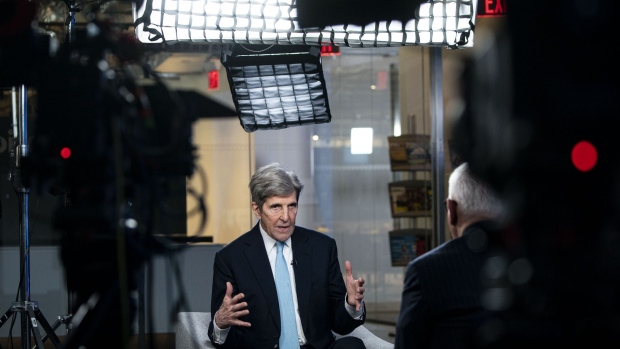 John Kerry, U.S special presidential envoy for climate, speaks during an interview on the David Rubenstein Show in Washington, D.C., U.S., on Wednesday, Jan. 26, 2022. Kerry warned Monday that the world is “in trouble” and off-track in its efforts to mitigate or reverse the impacts of climate change, reports The Hill. , Bloomberg

“We’re not in a good track right now,” Kerry said in an interview for an episode “The David Rubenstein Show: Peer-to-Peer Conversations” set to be broadcast on Feb. 16. “The world is not serious enough about reducing our emissions fast enough.”

Kerry, President Joe Biden’s special envoy for climate, said he would deliver that assessment during a virtual meeting on Thursday of fellow environmental ministers from countries responsible for 80% of the world’s greenhouse gas emissions. “I will be raising the subject that we are behind,” Kerry added.

His warning comes as the world burns more coal -- consumption of the fossil fuel surged roughly 20% in the U.S. and European Union last year -- and as energy supply concerns heighten political pressure on European leaders to slow the green transition.

China’s president, Xi Jinping, said earlier this week that the nation’s carbon goals shouldn’t clash with other priorities. And in the U.S., the Senate remains deadlocked over legislation that would devote some $555 billion to advancing clean energy and is seen as critical for the country to meet its emissions-cutting pledge.

Kerry, a former secretary of State, Democratic presidential nominee and senator from Massachusetts, decried the continued flow of funding to coal and natural gas plants.

“There’s about 300 gigawatts of new coal construction coming online at a time where the International Energy Agency says you’ve got to reduce coal plants by 870 gigawatts,” he said. “The imbalance of that is dangerous for everybody and is at the heart of what we really have to tackle now.”

Kerry, who helped broker the landmark 2015 Paris agreement and a follow-on pact at last year’s United Nations climate summit in Glasgow, linked the climate and coronavirus crises, saying in both cases the consequences of inaction are clear and costly.

In Glasgow, part of Kerry’s mission was assuring other nations the U.S. would follow through on its pledge to cut greenhouse gas emissions at least in half by the end of the decade, despite past retreats from the climate fight. Now, more than two months later, U.S. credibility on the issue remains at stake, with Biden’s climate-and-spending bill stalled in the Senate.

Proposed tax credits in the measure for renewable power, nuclear plants and advanced manufacturing are seen as vital -- along with environmental regulations, state action and private sector initiatives -- for the U.S. to fulfill its pledge. A separate infrastructure law enacted last year already marks a major step forward, Kerry said, with funding devoted to vehicle charging stations and the electric grid.

“The president is going to continue to try to fight for the best parts of what he thinks he could get through,” Kerry said. “We need that. We need that for the planet.”

“We don’t support reparations,” Kerry said. Instead, he said, the U.S. needs to support efforts to build resilience and help countries adapt to a changing climate.