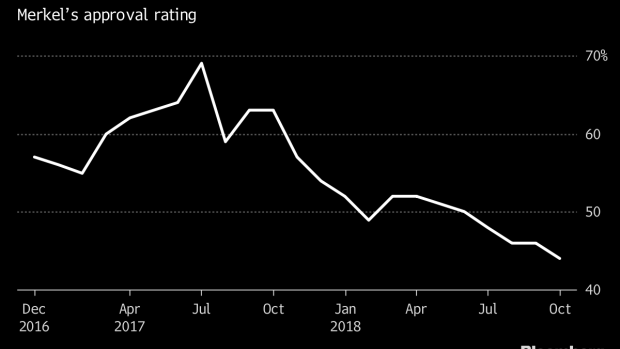 Even in an absolute monarchy, it can get away from you with one wrong move. Just ask Mohammed Bin Salman.

Last time we ran this survey in March, the crown prince of Saudi Arabia was strengthening his grip on the kingdom after pushing aside royal rivals. Analysts saw him potentially remaining in power for decades.

But he’s spent the past month trying to shore up his position with the U.S., his country’s most important ally, demanding explanations for the murder in Istanbul of a dissident writer and Turkey pointing the finger at the prince.

MBS, as the prince is commonly known, may still go on to dominate his country for years. But in the short term, the degree of uncertainty has jumped.

The outlook for most leaders has remained stable since our first snapshot of the political health of global leaders in March. The main loser has been Emmanuel Macron. A slump in his approval rating is increasing the chances the French president will lose his bid for reelection 2022. His European ally Angela Merkel announced this week that she’ll step down when her term ends in 2021, but that makes little difference to her shelf life. Analysts were already predicting that she’ll be forced to move aside before then.

With 17 world leaders under the microscope, we’ve analyzed public opinion, economic performance and the idiosyncrasies of domestic politics to gauge how long each one might be able to stay in power. Though as MBS shows, when the political weather changes, the outlook for any leader can change pretty quickly.

Saudi Crown Prince Mohammed bin Salman had positioned himself as the uncontested ruler of the world’s largest oil supplier for decades to come. Now, the prospect of the prince leading for another half century is on shakier ground.

Until the widening fallout from the death of Jamal Khashoggi, the Washington-based Saudi commentator, the 33-year-old had effectively run Saudi Arabia for his father, King Salman, after cleverly outmaneuvering older royal competitors. But his reputation at home and abroad has been severely tested by Khashoggi’s murder, raising questions about his ability to rule.

“His position remains strong, for now at least,” said Thomas Juneau, assistant professor at the University of Ottawa. “I don’t see the conditions allowing an organized challenge. But the more he accumulates costly mistakes, the more there is space for resistance to organize against him.”

A coup, assassination or war look the main risks to Kim Jong Un. Failing that, he will probably maintain his iron grip on North Korea for decades, just as his father and grandfather did. For a fuller analysis, click here.

Recep Tayyip Erdogan, modern Turkey’s longest-serving ruler, won a new mandate with sweeping extra powers in August.  Although Turkish markets have suffered a turbulent few months since then, the 64-year-old president remains the country’s most popular politician. He survived an attempted coup in 2016.

His party is arguing that the new executive presidency resets the clock on the constitutional limit of two five-year terms so Erdogan could serve until at least 2028 and he could stretch that even further if he called a snap election before his second term ends.

“Erdogan is likely to dominate Turkish politics for the foreseeable future,” Oner Bucukcu, a political analyst at Yildirim Beyazit University in Ankara. “He is effectively using his new powers to strengthen the public’s belief in his leadership.”

Over his 18-year-rule, Vladimir Putin has methodically neutralized any threat to his power, from ambitious oligarchs to Chechen separatists to Western sanctions.

The 66-year-old president, Russia’s longest-serving leader since Soviet dictator Joseph Stalin, won a new six-year term by a landslide in March. Still, despite total control over the political arena and national media, his approval ratings have since slipped to a seven-year low over plans to increase the retirement age.

In 2024, a constitutional limit should force him to give up the presidency. Though he sidestepped those rules once before, he’s suggested that’s not something he’d do again. The challenge is to ensure his system and his inner circle are safe after he goes.

“He has to build a system that will maintain the status quo even when he isn’t president,” said Tatiana Stanovaya, a political analyst at the R.Politik think tank. “The Putin regime must remain even without Putin.”

Prime Minister Narendra Modi, 68, is widely predicted to win India’s next national election in 2019, despite a dip in popularity. With five-year terms, that means Modi could rule over his country’s 1.3 billion people until 2024 or beyond, given the disarray among his opponents.

Modi’s Hindu nationalist Bharatiya Janata Party won a rare majority in 2014, while the rival Congress Party, under dynastic leader Rahul Gandhi, is trying to broker an alliance with other opposition parties.

“It is hard to see the Congress becoming an effective opposition force by 2024 as long as it remains in thrall to the Gandhi family,” said professor Katharine Adeney, director of the University of Nottingham’s Asia Research Institute.

The Chinese Communist Party repealed presidential term limits in February, clearing the way for 65-year-old Xi Jinping to stay in power past 2023. For a fuller analysis, click here.

After surviving an assassination attempt, frontline combat and prostate surgery, Iran’s 79-year-old Supreme Leader Ayatollah Ali Khamenei is likely to be in power until he dies. For a fuller analysis, click here.

With Venezuela’s economy in ruins, former bus driver Nicolas Maduro, 55, extended two decades of sweeping victories for his socialist party to win another six-year term in May. For a fuller analysis, click here.

Donald Trump’s first term has been defined by turmoil and controversy, but a surging U.S. economy and strong support from his base will boost his bid for a second term in 2020.

While the 72-year-old’s approval rating has been stuck in the low 40s, only two presidents since World War II have failed to make it past the four-year mark. While the special prosecutor’s investigation still hangs over Trump, Democrats would need a two-thirds majority in the Senate to impeach him, a distant goal even if they were to win back control next month.

Emily Sydnor, a political science professor at Southwestern University in Georgetown, Texas, said the fundamentals suggest Trump has a good chance of reelection. “The economy, when it’s doing well, is a strong predictor of success, as is partisanship,” she said. “While it’s looking quite possible that Trump could win a second term, but we’ll have to wait and see before we write it off as a sure win.”

Muhammadu Buhari will start as favorite for reelection in Nigeria’s presidential election next year so long as his health holds out.  For a fuller analysis, click here.

Benjamin Netanyahu’s scandals have gripped Israel for a year. But the country’s longest-serving prime minister since founding father David Ben-Gurion has held his fractious coalition together all the same, talk of an early election next year notwithstanding. For a fuller analysis, click here.

The French electoral system has been good to Emmanuel Macron, turning his 24 percent in the first round of the 2017 presidential election into total dominance of the country’s political institutions.

But the 40-year-old head of state may have to pull off a major escape act in 2022 if he’s to avoid being France’s third one-term president in a row.

His approval rating has slumped, a Europe-wide slowdown may delay the benefits of his unpopular reforms, and a series of missteps have cemented a reputation for being haughty and disdainful.

“He wants to be judged by his results,” said Nicholas Dungan, senior fellow at the Atlantic Council and a professor at Paris-based institute Sciences Po. “But the French will judge him by their impressions of him, and you know how critical the French can be.”

Shinzo Abe won a third straight term as leader of Japan’s ruling Liberal Democratic Party in September, putting him on course to become the country’s longest-serving prime minister. He already has about seven years under his belt.

While the 64-year-old has a good chance of serving his full three-year term to 2021, his plans to push through a divisive amendment to the pacifist constitution could still weaken public support ahead of an upper house election next year. Abe has said he doesn’t plan to stay beyond his current term, and attention is slowly turning to potential successors.

After 13 years at the top of German and European politics, Angela Merkel is approaching the end of her time in office.

Damaged by a string of disappointing election results and worn down by infighting within her coalition, Merkel announced this week that she’ll quit the leadership of her Christian Democratic Union rather than face reelection in December.

She says she wants to stay on as chancellor till her term ends in 2021, but if the CDU picks someone hostile as its new chief, she may not last long. Even if a loyalist takes over, it's very unlikely the party will head into 2021 with Merkel as its figurehead.

Cyril Ramaphosa’s rise to power in February was greeted with “Ramaphoria” by South African markets but that has evaporated since the economy fell into recession. The 65-year-old president has less than a year to shore up his position before an election due by August 2019.

The African National Congress is likely to retain its majority but polls suggest it’s on course for its worst-ever result and that will make Ramaphosa vulnerable.

His winning margin in last December's party leadership vote was the tightest since the end of apartheid in 1994 and ANC officials have allegedly discussed replacing him.

“The ANC’s performance in the election will determine how comfortable he is,” said Roland Henwood, a political science lecturer at the University of Pretoria. “The ANC will be under a lot of pressure.”

Mauricio Macri’s election in late 2015 heralded a new era for Argentina after more than a decade of populism under Cristina and Nestor Kirchner.

The 59-year-old president pushed through reforms to boost trade and investment and rein in inflation, while trying to protect the most vulnerable. With a bitter dispute with holders of Argentine defaulted debt finally settled, re-election in October 2019 seemed his for the taking at the start of this year.

But those plans swerved off course when a collapse in the peso sent the economy into a tailspin. With businesses and households under strain, confidence in Macri has slumped and opposition to his austerity agenda is growing.

“This will increase the risk of a populist government winning next year’s election,” said Andres Abadia, senior economist for Pantheon Macroeconomics. “Uncertainty will remain high, both on the economic and political front.”

U.K. Prime Minister Theresa May could be gone by the end of the month or she could limp on to see Brexit over the finish line in March 2019.

It’s a paradox that has defined the 62-year-old’s stay in office as Brexit has consumed the government, ripped apart her Conservative Party and left negotiators tearing their hair.

Rumors of her demise come almost daily, but the simple fact remains that her party has no obvious better option. There’s no election due until 2022, but before then May must navigate the perilous Brexit process. If that goes wrong, she could be cast aside overnight.

To contact the authors of this story: Ben Sills in Madrid at bsills@bloomberg.netPatricia Suzara in London at psuzara@bloomberg.net

To contact the editor responsible for this story: Flavia Krause-Jackson at fjackson@bloomberg.net