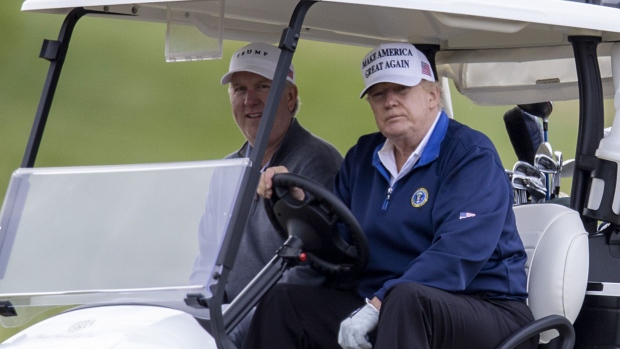 (Bloomberg) -- One of the starkest moments from the virtual Group of Twenty came when U.S. President Donald Trump skipped a session on the pandemic to hit the golf course. Just as telling was how many other leaders seemed checked out.

The gathering of the world’s top economies in Saudi Arabia was always going to be uncomfortable: The first Arab nation to assume the presidency, with a question mark hanging over it after the murder of government critic Jamal Khashoggi in 2018. Then came the devastation unleashed by the coronavirus that turned a source of national pride into a low-key affair that laid bare the limitations of global cooperation when so many were looking inwards.

The live feed captured glimpses of Russia’s Vladimir Putin arriving late, Spain’s Pedro Sanchez and France’s Emmanuel Macron checking their mobile phones, and U.K.’s Boris Johnson looking uncombed and reading from his notes. Yet the stakes for the world couldn’t be higher.

There’s the deepest recession since the Great Depression to contend with, and the painful reminder that it was during the 2008 financial crisis that the G-20 came into its own. There was an urgency around climate change dismissed by Trump throughout his tenure, and the race to distribute a Covid-19 vaccine that’s testing the spirit of setting aside nationalistic interests for the greater good.

The picture that emerged from two days of international diplomacy reduced to a form of Zoom meeting is that many leaders are relieved to have Joe Biden take over as U.S. president, though they think four years of “America First” cannot be easily undone, according to officials present.

Even with the incumbent a shadow of his former combative self, he still took credit for defeating Islamic State and bringing peace to the Middle East. On Sunday, Trump justified his exit from the Paris climate agreement because it was designed, he said, “to kill the American economy.” When it was his turn to speak on Saturday, Trump said that any American who wants immunization will be able to get it, and made no mention of sharing U.S.-made shots with other nations.

France was among a chorus of countries calling for faster progress on the distribution of vaccines, particularly when it came to the poorest nations. It’s common practice for leaders have others to step in their shoes, yet this G-20 took that practice to another level.

Trump has always played the wild card at such events. The difference now is that he’s deemed less relevant by his peers after getting voted out of office, even if he refuses to accept the election results. At a meeting of Asia-Pacific leaders on Friday, Trump was briefly placed at the bottom right box of the screen. At the G-20, his impact also seemed suddenly diminished.

German Chancellor Angela Merkel, who’s serving out 15 years at the helm of Europe’s most powerful country, dismissed Trump’s battle to remain in the White House. Her finance minister also took a jab, by saying “one participant used the occasion one more time to talk about his own grandiosity.”

Even in these anti-climatic circumstances, where officials couldn’t mingle, it was clear there was a different vibe.

One European official described it like a breath of fresh air. Another noted that after years of obstructionism, the U.S. delegation seemed more engaged, and that the final summit statement was stronger than many in recent years.

Next year the ball will pass to Italy for the G-20 and the U.K. for the Group of Seven and the United Nations climate conference, which will toughen the debate around global warming. Even a usually diffident China would appear to welcome a return to that kind of engagement.

“With Trump heading out, China and the U.S. could have at least some common language on multilateralism, even though their understanding may not be exactly the same,” said Wang Huiyao, an adviser to China’s cabinet.

In the G-20 statement, Trump quietly signed up to documents that U.S. officials had demanded be watered down in recent sessions. On medicines and vaccines, the leaders pledged to “spare no effort to ensure their affordable and equitable access for all people.”

Western allies to the U.S. are keen for Biden to fill the void left by Trump, taking back some of the ground that China has grabbed to play the champion of globalization. Merkel and Macron are keenly aware that Europe must rely less on the U.S. as the global policeman.

China poses competition, not only economically but as a leader in climate and science. Canadian Prime Minister Justin Trudeau called for pushback against what he called Beijing’s “more aggressive, coercive diplomacy.”

This was an exceptional year. The scale of the pandemic threw off decision-makers on every front. Leaders with an eye to their own voters appeared more worried about how to save Christmas back home then anything that went beyond their borders, many of which are still closed to just about any other country.

Trump left the meetings early, but so did China’s Xi Jinping and Brazil’s Jair Bolsonaro. It was a sign of the times and possibly a widely-shared sentiment of just wanting to turn the page on this year.

For those who thought this might be the last sighting of Trump, the president himself said he would be back.

According to a French official, he specified with his counterparts on the first day of the G-20 that he wished to keep working with them -- for a long time.