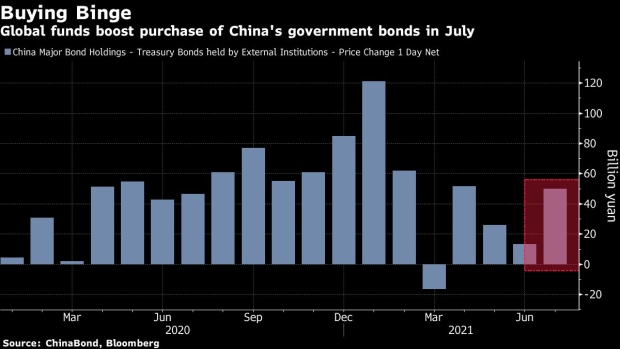 (Bloomberg) -- Global funds accelerated the purchases of Chinese government debt, the best-performing bonds in the world this year, as expectations of policy easing put China ahead of other nations that are moving toward withdrawing the stimulus deployed in the pandemic era.

Foreigners added 50 billion yuan ($7.7 billion) of the nation’s sovereign debt in July, increasing their holdings to a record 2.18 trillion yuan, data from ChinaBond show. The purchase was nearly four times that of June, reversing a two-month slowdown.The world’s first major economy that emerged from the pandemic is showing more signs of slowing down, boosting the appeal of its debt. The bond rally started after China policy makers surprised investors last month with the first cut in reserve requirement ratio in more than a year. It gathered pace in recent weeks as a worsening coronavirus outbreak in parts of the country and an equity selloff sparked by regulatory crackdown in several industries bolstered expectations for more policy easing.

China’s benchmark 10-year yield fell last month by the most since February 2020. The yields has declined 31 basis points this year, more than any other major bond markets tracked by Bloomberg. At 2.83%, the yield is still more than twice higher than U.S. Treasuries’ 1.13%.

The People’s Bank of China looks to be charting an independent path, diverging from global central banks including the Federal Reserve, as it seeks to provide support to a slowing economy. A meeting of the Chinese Communist Party’s elite Politburo chaired by President Xi Jinping at the end of July pledged more effective fiscal support for the economy and said monetary policy would provide sufficient liquidity.

The ChinaBond data cover the majority of the interbank market, where most government and policy bank notes are traded. More figures will likely be released by the Shanghai Clearing House that will cover some credit bonds in the interbank and exchange markets.

(Updates with a strategist comment in the penultimate paragraph)