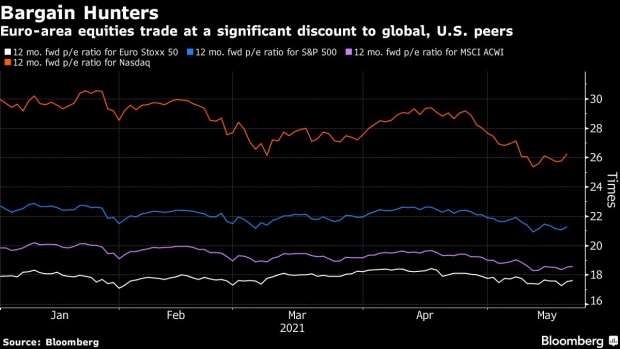 A commuter uses an escalator in the La Defense business district of Paris, France, on Monday, Nov. 9, 2020. France's economy will take a smaller hit from the new lockdown to contain the spread of Covid-19 than it did during the tighter restrictions on activity earlier this year, according to the country’s central bank. Photographer: Benjamin Girette/Bloomberg , Bloomberg

(Bloomberg) -- For so long the laggards of global equity markets, European stocks are back in favor and with the likes of Credit Suisse Group AG and Morgan Stanley joining an increasingly bullish chorus, investors are taking note.

The Euro Stoxx 50 Index of eurozone blue-chips is up 13% so far in 2021, outperforming the S&P 500 in the opening five months of the year for the first time since 2017 and topping all other major regional benchmarks. That’s coincided with a recent pick-up in inflows into European equity funds, while the latest Bank of America Corp. global fund manager survey showed that euro-area stocks are now the biggest regional equity overweight.

“This outperformance has further to run, given the scope for Europe to play catch-up with the U.S. as vaccine programs gather pace,” said Catherine Doyle, a strategist on the real return team at BNY Mellon’s ‎Newton Investment Management, which is overweight Europe relative to global equities.

What makes Europe so attractive right now is the vast presence of cheap sectors sensitive to an economic recovery being hastened by a ramp-up in vaccination efforts that initially trailed the U.S. and U.K. The region is also less susceptible to the inflation worries that have spooked markets of late, given a relative dearth of the worst-hit sectors such as technology.

Such factors are providing a catalyst to historically low valuations. The Euro Stoxx 50 Index trades at about 17.6 times 12-month earnings, compared with 21 times for the S&P 500, and 26 times for the Nasdaq. Unlike most global indexes, it has yet to reach its record high or even surpass its 2008 peak.

Europe’s recent outperformance is only just starting to get the attention of market players. Credit Suisse raised continental European stocks to overweight on Thursday, citing catch-up potential for the region’s economic growth that has lagged the U.S., its exposure to the green energy boom and low investor positioning compared to other regions.

Morgan Stanley favors European equities over the U.S. on earnings recovery as the Biden administration plans to boost corporate taxes. And U.S. investment management firm Eaton Vance is “significantly” overweight Europe in global and international equity portfolios, according to Chris Dyer, director of global equity, who sees the region’s outperformance continuing versus the U.S.

According to Bank of America and EPFR Global data, European equity funds have attracted inflows over the past six weeks. Yet there’s still a long way to go to catch up with peers. For 2021 to date, the region has attracted just $4.8 billion compared with a whopping $181 billion plowed into U.S. equity funds. Last year, investors pulled about $43 billion from European stock funds, the most among major regions.

International investors are also voting for euro-area equities by piling into exchange-traded funds. The U.S.-listed SPDR EURO STOXX 50 ETF is set for its biggest month of inflows since 2017 with about $300 million new additions in May, while the iShares MSCI Eurozone ETF this week had its largest single-day inflow of $187 million since October 2019.

To be sure, strategists surveyed by Bloomberg see limited scope for gains from current levels by the end of 2021, with the average forecast of 4,012 for the Euro Stoxx 50, down 0.3% from the Friday close. This kind of market might favor stock pickers over index followers.

Newton’s Doyle likes automakers such as Volkswagen AG, which can thrive on the adoption of electric vehicles, energy firms such as RWE AG that are making a push for a green-energy transition, and low-cost airline Ryanair Holdings Plc, which she expects to benefit from rising passenger volumes as travel resumes. Volkswagen is down 12% from its April peak and up 42% year-to-date, while RWE has fallen 5.6% this year and Ryanair is down 0.2%.

“Within the unlocking trade, continental Europe has lagged the U.S. and U.K. given the infections waves and vaccine rollouts,” Newman said in a video interview. “We feel that now is the time when the market is prepared to look out not necessarily at this year, but at 2022 and 2023, and start to assume recovery for those less-favored unlocking areas of the market.”

He sees Safran SA, a French aircraft engine manufacturer, which is up just 3.4% this year, and Sodexo SA, a French food services and facilities management company, which has gained 13% in 2021 but is down 10% from its March peak, as some of the companies that can benefit from the rebound.

Kevin Thozet, member of the investment committee at Carmignac, says the European market is in a “sweet spot” due to its balance of cyclical and quality names, such as luxury companies, which represent a large part of the index. The French asset manager with 39 billion euros ($48 billion) under management holds shares that include LVMH, Hermes International and Ferrari NV, in addition to Safran and Ryanair.

“The big attraction in the U.S. was, for a very long time, the technology sector. There are tech companies in Europe, but they aren’t as important. This didn’t help European equities in the past, but there’s a rotation in place right now and Europe benefits,” Thozet said in an interview.

Fiscal and monetary stimulus, along with a rebound in consumer spending, should enable economic activity in the euro area to return to pre-Covid levels by late 2021, according to Wei Li, global chief investment strategist at the BlackRock Investment Institute. BlackRock lifted euro-area equities to neutral in February and prefers them to the European credit market.

“In addition to a more positive macro backdrop, we see valuations in the euro area as supportive,” she said by email. “We still expect a rapid activity restart beginning in the second half of this year.”