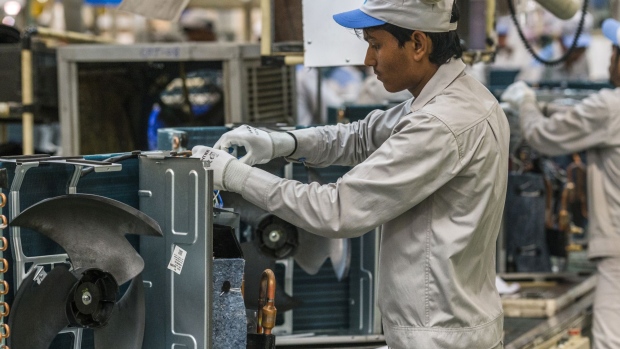 An employee works on an outdoor unit of a split system air conditioner on an assembly line at the Daikin Air Conditioning India Pvt. factory in the Rajasthan State Industrial Development and Investment Corporation's (RIICO) industrial complex in Neemrana, Rajasthan, India, on Friday, June 23, 2017. Japan’s foreign direct investment in India has risen since the global financial crisis, reaching nearly $3.5 billion in 2016. , Bloomberg

(Bloomberg) -- Daikin Industries Ltd., the world’s largest manufacturer of air conditioners, is betting that sales and production in India will eventually make up a bigger part of the company as the nation outpaces global growth.

“The market has a huge potential,” said Kanwal Jeet Jawa, chief executive officer of Daikin’s India operations. “We see India as a market, post-Covid recovery, as the best among all the other markets in the world.”

The goal is to more than double sales by 2025, after boosting revenue tenfold over the past decade, Jawa said. Just 5% of India’s homes and businesses have air conditioners, according to the manufacturer, which competes against local provider Voltas Ltd.

Daikin’s global sales are poised to benefit from two key trends: global warming and growing affluence in emerging economies. A deadly heat wave in India earlier this year underscored the need for better access to cooling products, as well as the need for supporting infrastructure. The local market is worth about 300 billion yen ($2.1 billion), according to the company.

Daikin is currently building a third factory in India, investing 15 billion yen in a facility that can produce 3 million units a year. The company is seeking to ramp up production for domestic buyers, as well as for export to the Middle East and Africa, according to Jawa, who is also the only foreigner on Daikin’s board.

“We have a huge opportunity in the Middle East and Africa as far as we are concerned,” Jawa said.