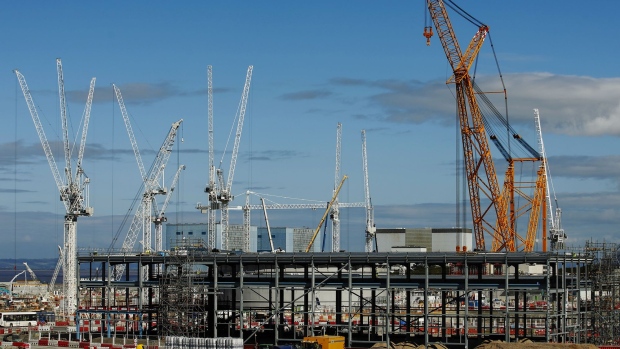 A Hinkley Point worker looks out from the platform of Big Carl. Photographer: Luke MacGregor/Bloomberg , Bloomberg

(Bloomberg) -- The world’s largest crane is getting ready to hoist more than 700 of the heaviest pieces of the first new nuclear plant being built in Britain in decades.

The machine, affectionately known as “Big Carl” after an executive at Dutch owner Sarens NV, is in place at Electricite de France SA’s 19.6 billion-pound ($24.1 billion) Hinkley Point C project in southwest England. It can carry as much as 5,000 tons, or the same weight as 1,600 cars, in a single lift and arrived on 280 truck loads from Belgium. It has taken about three months to build.

Nuclear power makes up about a fifth of Britain’s electricity. Most of those plants are near the end of their lives and will close in the next decade. Replacing them won’t be easy—as the scale of the project shows.

Earlier this year, EDF poured 9,000 cubic meters of cement, the biggest single biggest pour of concrete ever recorded in Britain. It was reinforced by 5,000 tons of steel built into a nest 4 meters high that’ll serve as the base of the first new reactor in the U.K. since 1995.

The new Hinkley plant is the biggest engineering project in the U.K. by some distance. It will cost more than the tunnel under the English channel, use enough steel for a railway from between London to Rome and require enough concrete to build 75 sports stadiums.

The plant won’t produce any electricity for at least six years. When it does, contracts signed between EDF, its partner China General Nuclear Power Corp., and the U.K. government will result in payments of almost double of what offshore wind developers will get in the coming years.

To contact the author of this story: Jeremy Hodges in London at jhodges17@bloomberg.net

To contact the editor responsible for this story: Lars Paulsson at lpaulsson@bloomberg.net