'This is not the light at the end of the tunnel ... this is a light in the darkness': Brian Bloom on Pfizer vaccine

The largest exchange-traded fund in the world is also the biggest loser this year, but at this rate it won’t be for long.

State Street’s SPDR S&P 500 ETF Trust (SPY) just added US$9.8 billion in a single day, according to data compiled by Bloomberg. That was the most in one session since December 2019, and one of the US$319 billion fund’s three best days in more than a decade.

Progress toward a vaccine for the coronavirus helped spark the move, as investors dived into America’s benchmark stock index as well as some of the most beaten-up sectors of the market. While the heavyweight tech shares that dominate the S&P 500 fell on Monday, almost three-quarters of the gauge’s members finished higher. 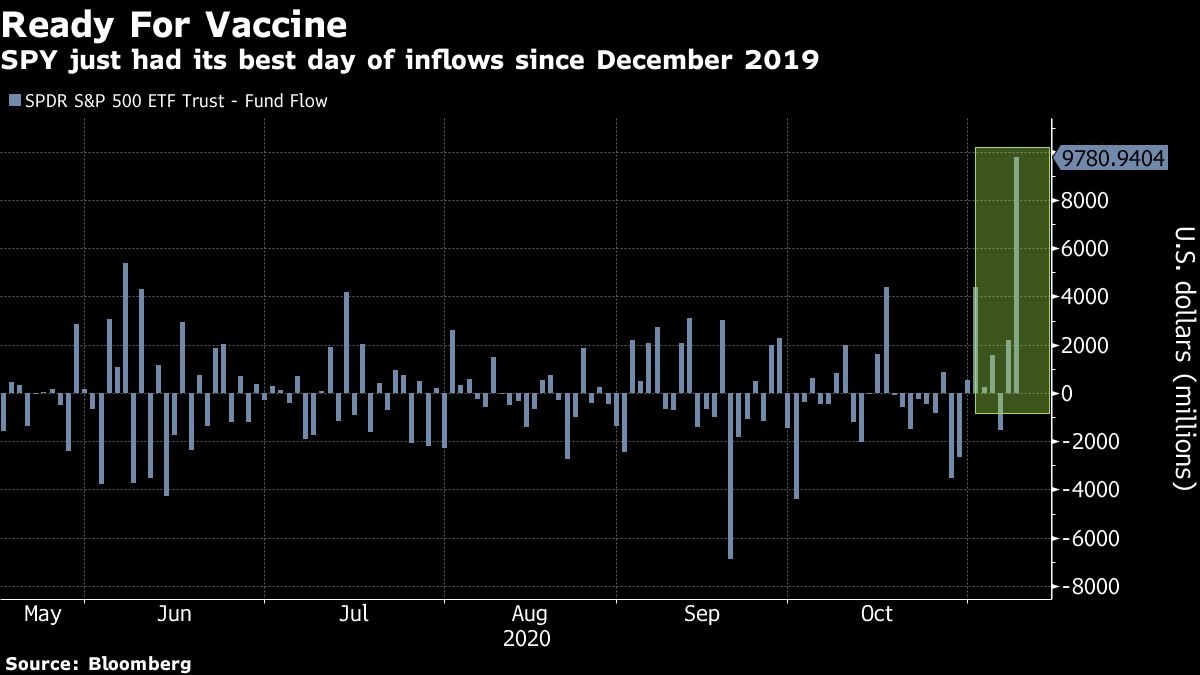 “Allocators sitting on the sidelines had no choice. Not participating, after such historic news, could be career suicide,” said James Pillow, managing director at Moors & Cabot Inc. “There is little doubt that some of the funds recently pulled from Nasdaq-focused funds quickly found a home in the broader, more cyclically based SPY and DIA,” referring to the SPDR Dow Jones Industrial Average ETF Trust.

The additions to SPY were more than 10 times bigger than the second-largest ETF winner on Monday and increased assets by 3.2 per cent to the highest level since February.

“You put it on the back of what happened last week with the market rallying strongly,” said Andrew Mies, chief investment officer of 6 Meridian. “We’re in uncharted territory in terms of how far we’ve moved in such a short period of time.”

Still, SPY has suffered net outflows of US$2.84 billion in the past year. The fund has been buffeted along with stocks in pandemic-fueled volatility, while its relatively high expense-ratio has seen it lose ground to cheaper competitors.

Following are SPY’s biggest holdings as of Nov. 9: