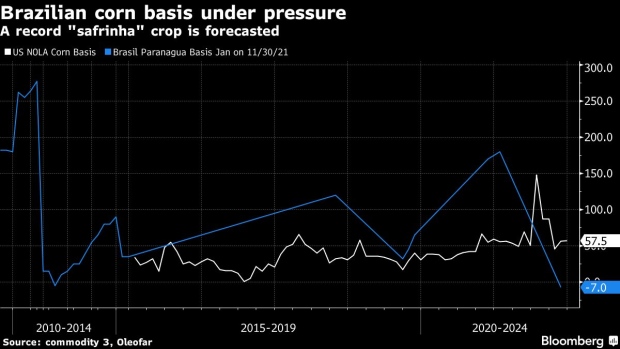 (Bloomberg) -- There are fresh signs the world’s largest ever soybean crop is getting even bigger, driving down global prices.

Brazil has seen nearly ideal weather for growing the oilseed, with abundant rains during planting season followed by plenty of sunshine in key regions like Mato Grosso. As the harvest approaches, local prices are sliding, pointing to expectations of a bumper haul. Private consulting companies are now raising the country’s output to 145 million metric tons, a world record.

The gigantic harvest could help to alleviate some of the inflation that has global food prices at the highest in years.

“Of course the weather in December will be key,” Marcelo Lacerda, head sales trader for HedgePoint in Brazil. “But I see a good crop coming out of Brazil.”

Supplies are still leftover from the previous season, which is weighing on the market and helping to make Brazil’s products cheaper than its main competitor, the U.S. Prices are so low that farmers are withholding sales, hoping that better deals will come up in January. That’s driven down overseas shipments. A standard 60-kilogram bag of soybeans plunged about 10% over the last two weeks.

There’s still room for rallies. There’s drought in the southern state of Rio Grande do Sul and in Argentina. La Nina weather patterns, currently in play, are a wild card. Any such shifts could impact yields, according to Lacerda.

Buyers of soybeans including local industries like chicken farms are also at the sidelines. They’re waiting for the harvest to start, when supplies will really mount and drive down prices even lower.

Brazilian corn, known as safrinha, is also benefiting from the favorable weather, and output is expected to reach all-time highs.