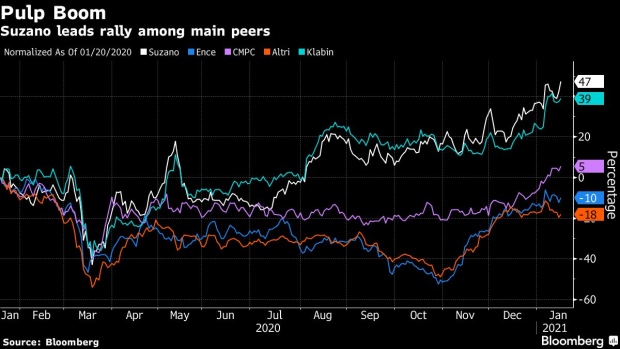 Global supplies of the material used to make paper cups, tissue and cardboard are tightening as Chinese demand recovers and after high-cost producers cut output in reaction to a pandemic-fueled price slump. That’s good news for low-cost companies like Sao Paulo-based Suzano, which has started to ratchet up prices.

The company has raised its prices in consecutive months. The most recent hike was for China, where Suzano will charge $580 a metric ton for hardwood pulp starting in February. Prices, which tumbled from $770 in mid 2018 to as low as $440 in August, may get back to $640 next quarter in Asia, Almeida said, citing analysts’ projections.

Prices have also risen in Europe, which was the region most affected by last year’s demand drop. For January, Suzano lifted European prices to $750 from 2020’s average of $680. While the company is still considering whether to apply another price increase for Europe, Almeida said consultants are predicting they will get to $850 this year.

A weaker dollar is cushioning the blow of higher prices for customers in both regions.

Price gains have an outsized impact on Suzano, given pulp accounts for 90% of its earnings before items, the most among peers, according to JPMorgan Chase & Co. The company’s share gain in the past year is more than double that if of an index of timber and forestry stocks. Suzano rose as much as 5.1% in Sao Paulo on Monday.

Market tightness has led buyers to accelerate monthly purchases beyond the volume laid out in their contracts in order to avoid further hikes, Almeida said. He declined to comment on Suzano’s clients.

Last week, JPMorgan said some industries have been denied new orders due to low inventories. The scope for clients to increase monthly volume requests is limited, Almeida said.

“What I can say is that Suzano is meeting all of its contracts,” he said. The company plans to use more of its production capacity this year, although he declined to say if those plans could be stepped up.

Producers in North America, where production costs are higher than in Brazil, have operated with tight or negative margins due to prolonged low prices, an up-tick in logistics costs and dollar weakness, he said.

That saw some plants shut, and stifled maintenance spending last year at other operations, which has led to unexpected output reductions, Almeida said.