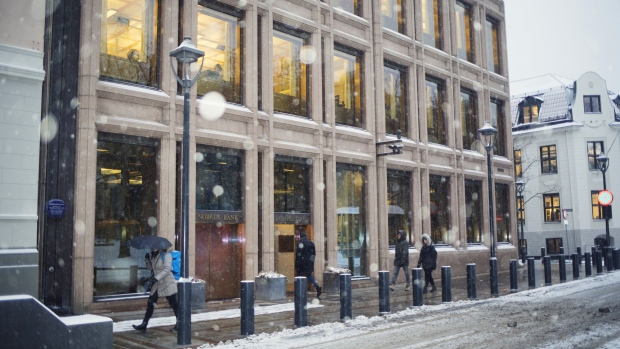 Pedestrians pass the headquarters of the Norges Bank, Norway's central bank, in Oslo, Norway, on Wednesday, Nov. 22, 2017. The world’s biggest wealth fund has taken note of some worrying signs in global real estate markets, and decided not to pull back. Photographer: Kyrre Lien/Bloomberg , Bloomberg

Norway plans to draw a record 382 billion kroner (US$37 billion) from its wealth fund, forcing the world’s biggest sovereign investor to embark on an historic asset sale to generate cash.

The unprecedented withdrawal, revealed in Norway’s revised budget for 2020, is more than four times the previous record set in 2016.

The development exposes the scale of the economic damage done by the twin crises of Covid-19 and a collapse in global oil markets, with western Europe’s biggest crude exporter now facing its worst economic slump since World War II.

For the first time, Norway’s government is set to withdraw considerably more than the US$1 trillion fund generates in cash flow from dividends and interest payments. In the budget, that income is estimated at 258 billion kroner this year, meaning asset sales could reach 124 billion kroner, or US$12 billion.

“It’s obviously an historic event,” SEB Chief Strategist Erica Dalsto said. “But we’re also in a crisis that lacks historical parallels. This illustrates the double-whammy that’s hit the Norwegian economy, with repercussions from both containment measures and the oil-price collapse.”

It’s not clear whether the cash flow estimate in the budget reflects the drop in dividends the fund is now clearly facing, after companies shelved shareholder payouts. Norges Bank Investment Management, which manages the fund, declined to comment on the estimate, while Norway’s Finance Ministry didn’t immediately reply to an email seeking more details.

The fund is likely to focus on its bond portfolio to generate the cash the government needs, both in the form of outright sales and by retaining cash as some bonds mature. (It needs to replenish its holding of stocks after its equity portfolio fell below a required 70 per cent target of the total portfolio.)

Norway’s government uses its oil wealth to plug budget deficits every year. Until 2016, the so-called structural oil-corrected deficit was covered by the state’s income from petroleum, namely taxes, stakes in offshore fields and dividends from Equinor ASA.

As long as the government was generating a surplus, it could deposit money into the fund. In 2016 and 2017, deposits were replaced by withdrawals, as petroleum revenue dwindled due to a slump in prices. But the fund was still able to cover that easily with its cash flow.

In 2020, everything changed. The government now expects to spend a record 420 billion kroner of oil money on crisis packages to prop up its economy, with the collapse in petroleum revenue compounding the shock. The government predicts its net cash flow from petroleum activities will drop by 62 per cent to 98 billion kroner, the lowest since 1999.

Norway has a self-imposed fiscal rule stating it should use no more than 3 per cent of the fund’s value each year to plug budget holes (which represents the long-term real-return expectation for the fund).

But it’s allowed to stray from that limit to help the economy during downturns. At 4.2 per cent this year, spending will exceed the cap for the first time since the financial crisis in 2009.

Norway must eventually return to the 3 per cent limit, but this year’s breach is entirely justified, said Finance Minister Jan Tore Sanner.

“Even if it’s expensive, it’s necessary,” he told a news conference. “We are lucky in Norway. Where other countries need to borrow money -- maybe even before they’ve paid back following the financial crisis -- we have solid financial muscles.”