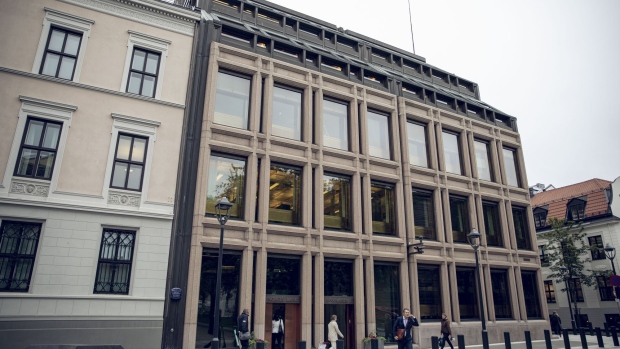 Pedestrians pass the entrance to Norway's central bank, also known as Norges Bank, in Oslo, Norway, on Wednesday, Sept. 4, 2019. Slyngstad, the man managing Norway's $1 trillion wealth fund is looking beyond the current political turmoil, vowing to invest in the U.K. "no matter what" and planning to plow another $100 billion into the U.S. stock markets. Photographer: Odin Jaeger/Bloomberg , Bloomberg

(Bloomberg) -- Norway’s sovereign wealth fund, the world’s biggest, will let its employees continue working from home a couple of days a week once the pandemic is over, Chief Executive Officer Nicolai Tangen said.

Staff at the Oslo-based investor, which oversees $1.3 trillion in assets, will be allowed to spend “up to two days” a week working from home, Tangen told lawmakers in Norway’s parliament during a hearing on Monday. But there will also be “two set office days for everyone,” he said, so that “we can have the meetings we need to have in the office.”

Tangen, a former London-based hedge-fund manager, is the latest prominent member of the financial industry to acknowledge that life won’t return to pre-pandemic norms even after the Covid crisis subsides. Barclays Plc CEO Jes Staley recently said he won’t force employees to return to the office, while Deutsche Bank AG is working on plans to let staff work from home up to three days a week.

At Norway’s wealth fund, Tangen said he was considering requiring staff to be in the office on Tuesdays and Thursdays. He also said no one would ever be forced to work from home, but said he thinks granting employees the option on a voluntary basis “can be positive.”