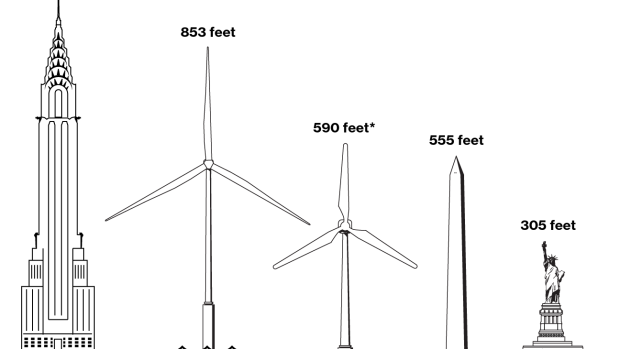 (Bloomberg) -- The tallest, most powerful wind turbines ever made are coming to U.S. waters care of General Electric Co.

Denmark-based Orsted A/S plans to use 12-megawatt turbines made by GE for projects off the coast of Maryland and New Jersey, according to a statement from the companies Thursday. The 853-foot (260-meter) turbines are almost as tall as New York’s Chrysler Building.

States from New York to Virginia are pushing to develop wind farms in the Atlantic to bring clean power to coastal cities. The massive projects will mark a dramatic shift in how the U.S. generates electricity and sow seeds for what analysts say could become a $70 billion industry. That bodes well for GE and other turbine makers.

“Offshore wind is a high-growth segment for our company,” Jerome Pecresse, chief executive officer of GE Renewable Energy, said in the statement.

Off Maryland, Orsted, plans to install GE’s Haliade-X turbines for its Skipjack project, scheduled for completion in 2022. In New Jersey, the developer will use them for a 1,100 megawatt project off Atlantic City that will supply a half million homes starting in 2024.

Under Governor Phil Murphy, New Jersey has set a goal to get 3.5 gigawatts of power from offshore wind by 2030. New York is pushing for 9 gigawatts by 2035, enough to power as many as 6 million homes.

To contact the editors responsible for this story: Lynn Doan at ldoan6@bloomberg.net, Joe Ryan, Steven Frank