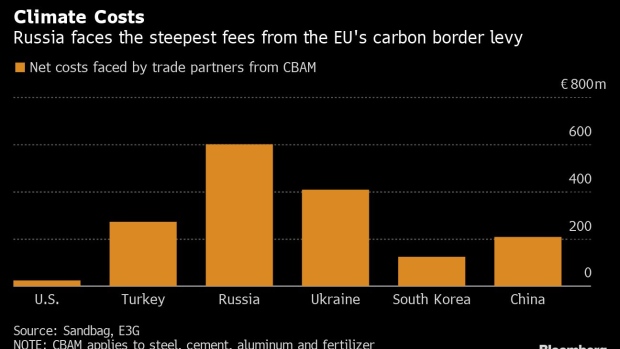 (Bloomberg) -- The world’s first pollution-import levy, proposed by the European Union on goods from steel to aluminum, may not actually cost the bloc’s competitors that much, according to a study by environmental groups Sandbag and E3G.

While the politics surrounding levies on polluting industries are politically toxic, the costs involved are comparatively small. China, one of the biggest critics of the so-called carbon border adjustment mechanism, would by 2035 face net costs of around 2% on 5 billion euros ($5.9 billion) of iron and steel exports to the EU.

“The impact of the likely CBAM scenario on EU imports from China will be very small,” the authors including Adrien Assous said. “The cost will mainly be borne by EU consumers, while importers recover most of it thanks to price increases in EU markets.”

CBAM, which aims to prevent companies from simply shifting their emissions away from the EU to more loosely-regulated countries, still needs approval from member states and the European Parliament.

The U.S. would be least affected by the proposed measure, facing around 10 million euros in net costs under the carbon border adjustment mechanism in 2026, rising to 25 million euros in 2035, according to the report.

Russia would face the biggest impact of around 600 million euros by 2035, coming mainly from iron and steel imports. For China, the effect too would be relatively small, rising to about 200 million euros in 15 years time.

The CBAM proposal isn’t likely to do much to curb greenhouse gas emissions. Estimates from German think tank Bertelsmann Stiftung, said it would only lead to an extra 0.2 percentage points reduction in the amount of CO2 discharged into the atmosphere globally. Still, some see the EU’s plan as more of a lever or threat to try to force other countries to match Europe’s climate ambitions.