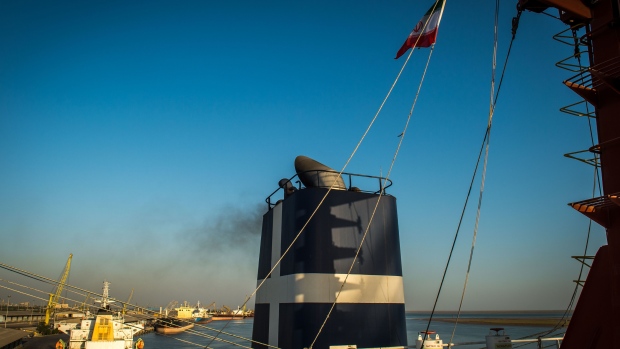 The funnel of a cargo ship discharges black smoke at Bandar Imam Khomeini (BIK) port in Bandar Imam Khomeini, Iran, on Thursday, May 23, 2019. Iranian officials have said that the raft of U.S. sanctions against their country, which was tightened last month, is aimed at fueling popular dissent in an effort to topple the leadership. Photographer: Ali Mohammadi/Bloomberg , Bloomberg

(Bloomberg) -- Shipping’s global regulator has signaled that a small CO2-based charge on vessels’ marine fuel will not be approved at a meeting this week.

While the proposed price is extremely low, the levy is significant because it would be the first ever mandatory, global “fee-based” carbon price, according to the World Bank. The plan was discussed at international talks on Wednesday and, with many countries raising concerns, provisionally deferred to a future meeting.

The plan, which is backed by multiple countries and a major industry trade group, is not billed as a carbon tax and is not intended to change shippers’ behaviour. Instead, the idea is to raise about $5 billion to use on research and development into clean fuels and propulsion systems for international shipping, which is almost exclusively powered by oil and spews more CO2 into the atmosphere than Germany and the Netherlands combined.

Still, a plan for a tiny charge making such slow progress only highlights the challenges shipping faces to decarbonize. Any CO2 levy explicitly designed to actually change shippers’ behaviour and bridge the price gap between marine fuels made from oil and cleaner alternatives would be far more expensive. Figures pitched by industry titans like A.P. Moeller-Maersk A/S and Trafigura Group Pte are hundreds of times higher.

The proposed payments in this plan only equate to $2 per ton of oil-derived marine fuel, less than 0.5% of the cost of very low-sulfur fuel oil – a popular propellant – in Rotterdam. Crucially, a CO2 price of 62.4 cents a ton is the basis for that charge, meaning any ships burning lower-carbon fuels -- like LNG -- pay less per ton consumed.

The upshot is that even though these figures are very low, the R&D fund can be seen as establishing the basic idea of forced payment for pollution caused by using marine fuels. And it would ultimately be a UN organization that gave the scheme the go ahead.

“It relies on a global organization, as opposed to a sovereign nation, taxing shipping to generate revenues,” said Faig Abbasov, shipping director at Transport & Environment, an NGO. It’s the same controversy which surrounds so-called market-based measures, he added. MBMs are rules that push for behavioral change by using financial incentives, like a carbon tax.

The R&D plan is backed by the International Chamber of Shipping, a trade group which represents more than 80% of the world’s merchant fleet. In Wednesday’s meeting, it pointed out that the proposal required no money from governments or taxpayers, with funds instead coming from the industry.

“If we can’t find a way to rapidly accelerate research and development, we risk putting back the decarbonization of shipping by several years,” said Simon Bennett, deputy secretary general at the ICS. The trade group has made a separate proposal for a global carbon levy.