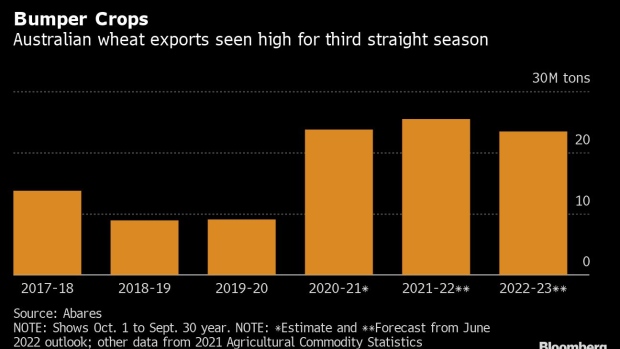 Wheat is loaded onto a bulk carrier at the Port of Geelong in Geelong, Victoria, Australia, on Friday, March 4, 2022. Wheat soared to the highest level since 2008 on mounting fears of a global shortage as the Ukraine war shuts off over 25% of the world’s exports of the staple used in everything from bread to cookies and noodles. , Bloomberg

(Bloomberg) -- Bottlenecks at Australia’s biggest wheat export terminals have opened up opportunities for innovators who are using lines of smaller ships and fleets of trucks to get more supplies onto global markets craving grain.

Two consecutive bumper harvests have stretched capacity at the nation’s major shipment terminals run by companies such as CBH Group, GrainCorp and Viterra. Now, with another large crop looming later this year, impatient exporters are increasingly turning to other ways of getting grain to market.

The world is in dire need of wheat from Australia, one of the world’s top suppliers. Prices of the essential food grain surged to a record in March after Russia’s invasion of Ukraine choked exports from the Black Sea region. That helped drive global food inflation to an all-time high, and while wheat prices have since come down from their peak, they are still about 30% more expensive than the average cost in the past 10 years.

“People are coming up with novel ways of getting around having to build permanent structures, and making them much more scalable,” James Maxwell, senior manager at Australian Crop Forecasters, said. “They’re a real standout, and they’ve really ramped up their exports over the last couple of years.”

The share of bulk grain exports shipped by non-bulk handling companies has jumped to 18% so far in the 2021-22 season from just 2% three years earlier, according to data from the Melbourne-based consulting firm.

Still, for the smaller operators to provide a significant boost to overall export capacity, more facilities will need to be built, Maxwell said by phone. While these companies may benefit now when capacity is stretched, they would have to compete with the scale of the heavyweight bulk handlers in the long-term. That raises questions over the viability of such projects, especially in years of drought when the country isn’t going to have a bumper crop, he said.

Meanwhile, the sheer pace of shipments this year continues to pile pressure on supply chains. With Australian exports expected to power through until the next harvest -- well past the end of the typical shipping season when ports undergo maintenance -- that could compound inefficiencies.