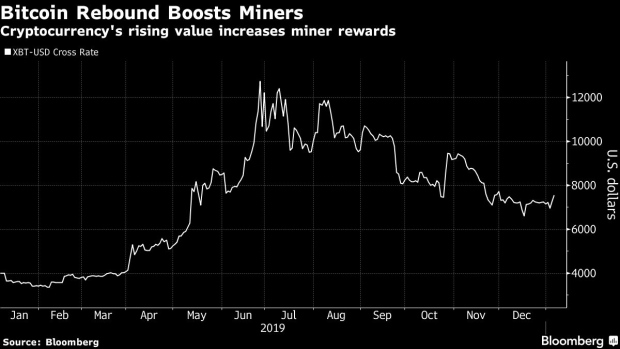 The two firms have in principle agreed with Northern Bitcoin AG subsidiary Whinstone Inc. to process cryptocurrency transactions at the German company’s facility within the coming months, according to people familiar with the matter.

Renting out capacity to SBI Crypto, a unit of SBI Holdings, and GMO may help Northern Bitcoin to get further large, crypto-savvy investors on board, the people added, asking not to be identified because the matter is private. Spokesmen for Northern Bitcoin, GMO and SBI declined to comment.

Northern Bitcoin in recent years shifted away from mining Bitcoin itself and instead plans and operates mines for large investors, shielding it from wild price swings. Large leasing contracts typically boost revenues and profits.

The Frankfurt-based firm last month said its data center in Rockdale will have an initial capacity of 300 megawatts when it starts operating and reach 1 gigawatt by year end. That is more than three times the capacity of a nearby crypto mine operated by China’s Bitmain Technologies Ltd., currently deemed the largest on earth and located in an old aluminum smelting plant of Alcoa Corp.

Rockdale, once nicknamed the “town where it rains money” at the height of aluminum production in the 1950s, is one of the Texas locations that has seen an influx of large scale crypto miners. U.S. startup Layer1, for instance, is planning to set up a site in West Texas.

Texas is attractive to often Libertarian-leaning crypto proponents given its history of independence, as well as having plenty of cheap energy and renewable sources, notably wind, said Mike McGlone, senior commodity strategist at Bloomberg Intelligence.

Wind-power generation accounted for more than 20% of Texas’ electricity last year and will overtake coal for the first time this year, according to BloombergNEF estimates.

Bitcoin miners essentially compete to solve mathematical problems to process transactions on Bitcoin’s blockchain, receiving coins as a reward. While mining was easier for everyone for anyone with a computer when Bitcoin debuted in 2009, enthusiasts now need large-scale networked computers to do the work, and cheap electricity is key.

The bets by SBI and GMO mark the entry of notable institutional investors at a time Bitcoin is coming off an eye-catching 2019, which saw it gain close to 95% despite repeated bouts of volatility. That’s emboldened some investors and analysts to call for further gains this year as adoption rates increase and fans continue to flock to decentralized currencies.

“Bitcoin is attracting more institutional investors and with the notion of limited supply and mass adoption -- Bitcoin is winning this race,” McGlone said.

To contact the editors responsible for this story: Kenneth Wong at kwong11@bloomberg.net, Dave Liedtka, Brendan Walsh