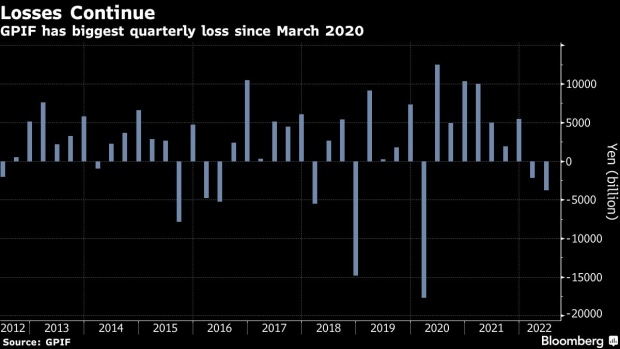 (Bloomberg) -- Japan’s state pension fund, the world’s largest, had its worst quarter in two years as declines in global stock markets during the three months through June eroded the value of its assets.

The Government Pension Investment Fund lost 1.9% during the quarter, or 3.75 trillion yen ($28 billion), reducing its total assets to 193.01 trillion yen, the fund said in Tokyo Friday. Its Japanese stocks fell 3.7% during the period, while foreign equities slid 5.4%. Domestic debt declined 1.3%, while foreign bonds returned 2.7%, thanks to the dollar’s gain of almost 12% against the yen.

With about half of the GPIF’s assets invested overseas, the yen’s rapid depreciation since March has helped cushion the fund’s losses for two straight quarters. The previous loss during the January-March period was the first under the watch of GPIF President Masataka Miyazono, who took the top post in April 2020 in the wake of a pandemic-induced global equity rout.

“Major stock indices domestically and globally fell amid concerns over an economic slowdown from monetary tightening as major central banks around the world raised rates or unwound quantitative easing with inflation progressing,” Miyazono said in a statement.

During the April-June period, the MSCI All-Country World Index of global stocks and the S&P 500 Index both slumped 16%, while the Topix index dropped 3.9%. Yields on 10-year US Treasuries rose 67 basis points in the period, while benchmark Japanese government bond yields were little changed.

“Given that 50% of its portfolio is stock sensitive and 50% currency sensitive, returns will swing largely if these markets do,” said Takafumi Yamawaki, the head of local rates and currencies research at JPMorgan Securities Japan Co.

The GPIF’s loss was the steepest since a global equity rout in the first quarter of 2020 wiped out a record $165 billion from the fund’s assets.