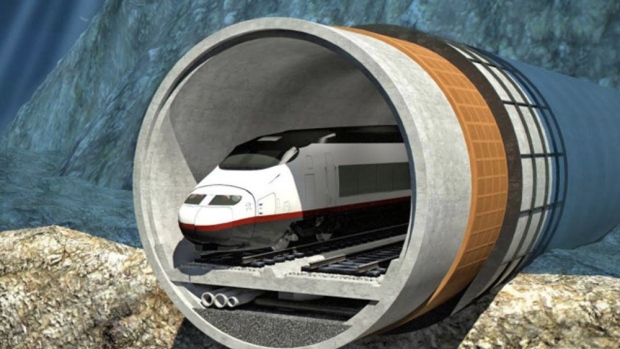 A plan to build the world’s longest undersea rail tunnel has hit its first snag.

Financing of 15 billion euros (US$16.8 billion) was agreed this year for the tunnel to link Finland and Estonia. But the Baltic nation of 1.3 million people wants more details on that funding, the business plan behind the idea and Finland’s role before giving the green light.

“We need a clear understanding of where the money is coming from and in what amount,” Estonian Economy Minister Taavi Aas said in an interview. “Where are the guarantees that it will be completed? The developer hasn’t been able to respond how it’s estimated the volume of people that will be traveling through there.”

The tunnel between Helsinki and Tallinn would span more than 100 kilometers (62 miles) and entails construction of at least one artificial island. The project was founded by Finnish entrepreneur Peter Vesterbacka, formerly of Rovio Entertainment Oyj, which developed the Angry Birds video game.

The financing, to be provided by China’s Touchstone Capital Partners Ltd., will cover the entire cost of the project, the tunnel company Finest Bay Area Development Oy said in March.

A tunnel could be economically feasible as a private-public partnership, with European Union aid covering 40 per cent of the cost of 13-20 billion euros, a study commissioned by both countries showed last year. Aas said it’s hard to square the results of that study with Vesterbacka’s plans.

“We’re working on providing more detailed answers to the government so a decision can be taken as soon as possible,” according to Paul Kunnap, a lawyer representing the developer.

Some of the details sought by Estonia will only become clear once further studies take place after the government approves the project, he said by phone.

Finland’s government hasn’t discussed the tunnel project and it’s not part of its policy program, according to Sabina Lindstrom, director-general of the Networks Department at the Ministry of Transport and Communications.

“We’ve had unofficial talks with our Estonian colleagues regarding their idea of a memorandum of understanding, but they haven’t yet sent an official request to sign one,” she said Aug. 12 by phone.

“If the developer says today that they don’t want any guarantees from the governments, we can’t just let them start digging the tunnel,” he said. “It doesn’t work like that.”

--With assistance from Kati Pohjanpalo