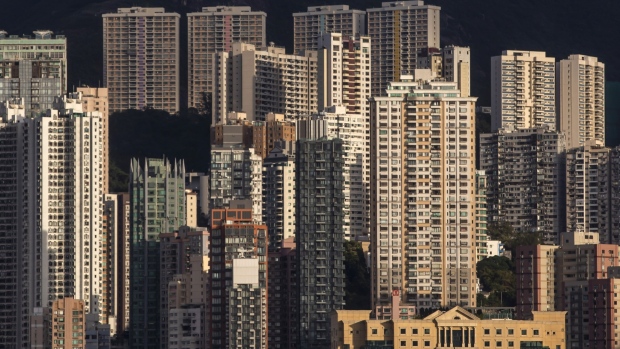 The world’s most expensive property market is unstoppable.

Despite a struggling economy and a wave of emigration following years of political turmoil, demand for homes in Hong Kong -- ranging from luxury mansions to shoebox apartments -- remains unquenched.

In a few hours, buyers snapped up 45 new apartments worth a total of HKUS$248 million (US$32 million) in Henderson Land Development Co.’s The Upper South project on a recent Sunday. New World Development Co.’s The Pavilia Farm III was so popular that 88 buyers had to vie for one apartment -- making it the most in-demand project since 1997.

Property prices in the city are hovering near an all time-high set in mid-2019. Secondary market transactions in the 10 biggest housing estates are set to surpass HKUS$20 billion for the first half of 2021, the highest in 23 years, according to Centaline Property Agency Ltd.

Hong Kong isn’t alone in a real estate frenzy that’s been fueled by rock-bottom interest rates to prop up economies worldwide during the pandemic. But its resilience has come against the odds. The mass protests in 2019 and introduction of a national security law in the following year prompted angst over the city’s future. A potential exodus of residents to the U.K. via its British Nationals Overseas visa program exacerbated worries about real estate sales. 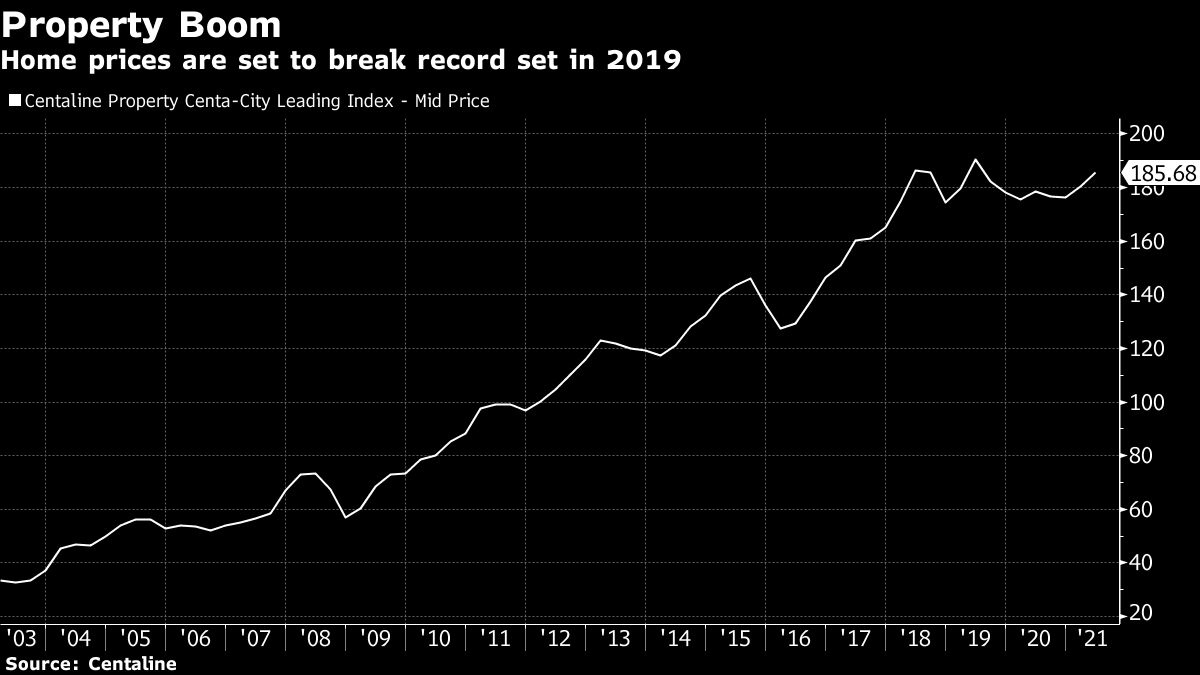 Yet those concerns proved to be unfounded in the city of 7.5 million, where space is precious and demand for homes continues to outweigh supply.

“While a higher level of migration may be unfavorable to residential prices, the negative effect is likely to be minor,” said Nelson Wong, head of research at Jones Lang LaSalle in Greater China. “It is insufficient to turn around the current predicament of severe supply-demand imbalance.”

The market’s fortitude is an encouraging sign for Hong Kong’s developers and economy, but it also poses problems. Further price gains would add pressure on the government to make housing more affordable in a city where only 52 per cent of residents own their apartments. China wants local officials and companies to stabilize the stratospheric property values -- the origin of social discontent in President Xi Jinping’s eyes.

“Now that Beijing sees that the political problems in Hong Kong are solved, it’s shifting its focus to addressing social issues, especially property,” said Ivan Choy, who teaches politics at the Chinese University of Hong Kong. “Record-breaking home prices become more of a reason for the Hong Kong government to show its ability” to placate residents by tackling the issue, Choy said.

Hong Kong’s government is already acting. It’s accelerating land seizures in the New Territories to increase supply, while hinting at introducing a vacancy tax on unsold new inventory. An US$80 billion artificial island project is in the works to help ease the property crisis, though homebuyers will have to wait until the 2030s before it’s ready.

The government has also made it easier to get a home loan. In 2019, it lowered the ratio of down-payments required for certain mortgages. Relaxed mortgage insurance restrictions -- which allow banks to lend more without incurring extra credit risk -- may keep a fire lit under residential sales despite the emigration wave to the U.K., said Patrick Wong, an analyst with Bloomberg Intelligence.

The BN(O) visa program had received 34,300 applications by the end of the first quarter, according to the U.K. Home Office. Bloomberg Intelligence estimated that as many as 16,300 homeowners could leave the city, with US$19 billion in proceeds if they all decide to sell their properties.

To be sure, Hong Kong’s home price inflation is moderate compared with places like New Zealand and Canada, ranking 46th last quarter in an index compiled by Knight Frank. In the U.S., where bidding wars are now common in suburbs, prices surged the most on record in the three months.

Optimism toward the property market is reflected in the shares of Hong Kong’s Big Four developers. Sun Hung Kai Properties Ltd., CK Asset Holdings Ltd., Henderson Land and New World have all seen their shares rise this year. CK Asset leads the gains at 32 per cent. 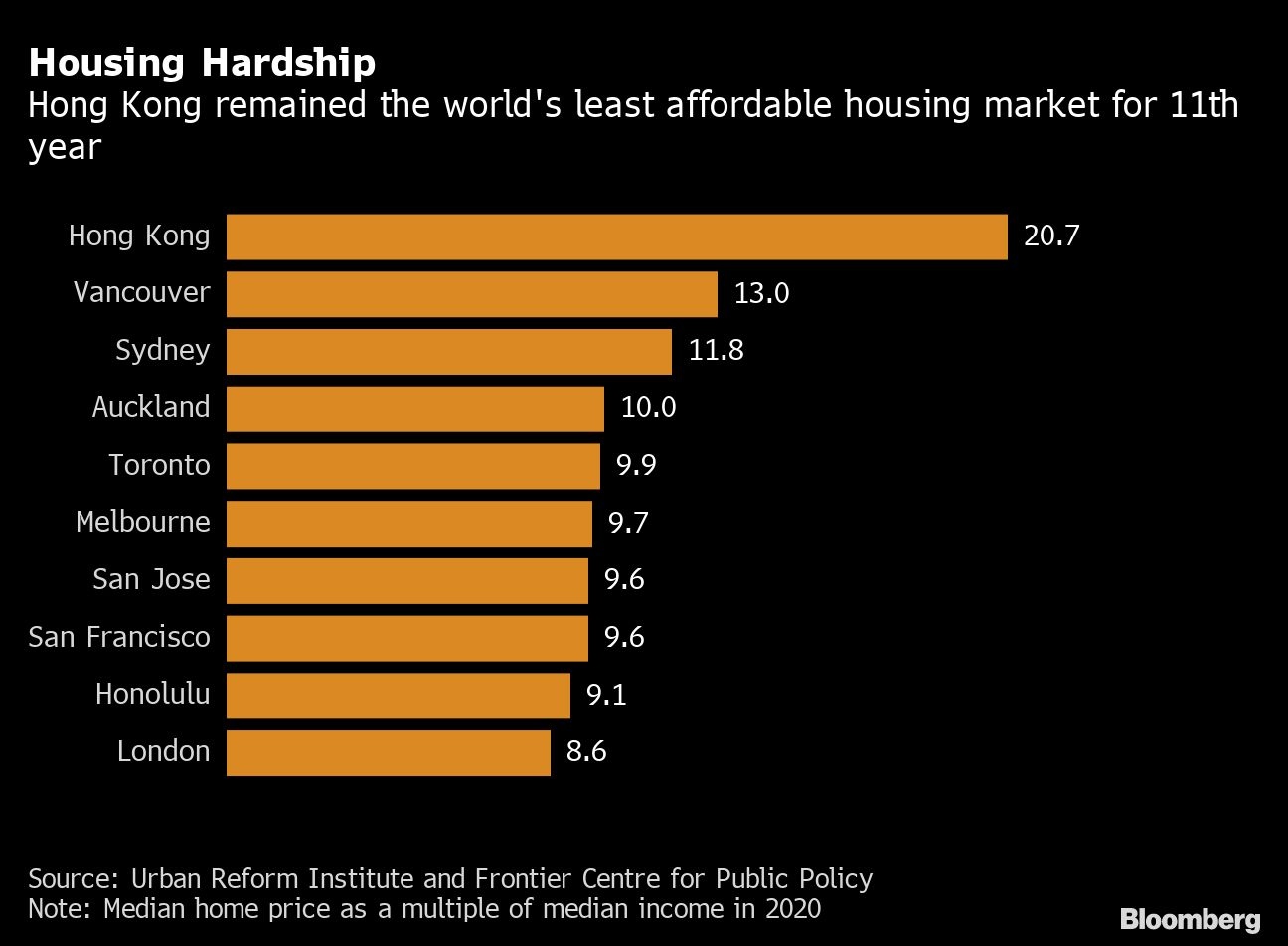 Hong Kong’s average property value was a world-beating US$1.25 million as of June 2020, according to CBRE Group Inc.

The city’s low housing stock can be traced back to the Asian financial crisis in 1997, when the government froze land supply to support the property market. It didn’t drastically resume land formation until around 2008. That created a logjam which led to the housing problems of today, said Ling Kar-kan, a former government director of planning.

The supply of new homes continues to decline. The number of private units that can be produced from available land plots plunged from a peak of 25,500 three years ago to 13,020 this year, according to think tank Our Hong Kong Foundation.

Mainland Chinese buyers are also helping to boost demand for homes. They accounted for 11.2 per cent of purchases by value in the first four months, up from 10.5 per cent in the same period last year, according to Midland Realty.

That all adds up to one thing: more rising prices. Cushman & Wakefield expects home values will climb 5 per cent to a record in the second half.