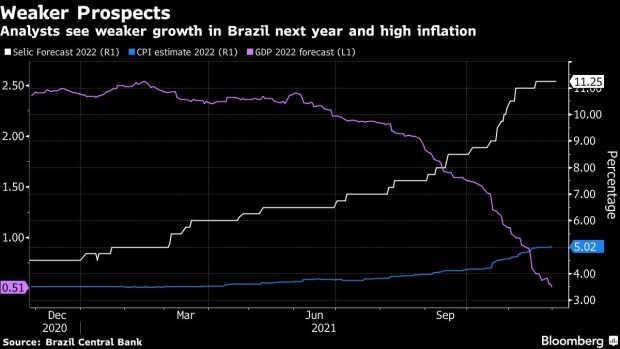 Roberto Campos Neto, president of the Central Bank of Brazil, speaks during a press conference in Brasilia, Brazil, on Thursday, Jan. 9, 2020. Campos Neto said that recently there have been some increases in market inflation expectations and economic growth projections. Photographer: Andre Coelho/Bloomberg , Bloomberg

Nearly all analysts surveyed by Bloomberg expect policy makers to lift the benchmark Selic to 9.25% on Wednesday, in line with the central bank’s previous guidance. The monetary authority has already raised rates by 575 basis points since March, the most among major global economies.

Policy makers led by Roberto Campos Neto are confronting a rapidly worsening outlook for Latin America’s largest economy. Brazil slipped into recession in the third quarter and growth likely remained weak in the final months of the year, prompting traders to back off bets of a rate hike of as much as 200 basis points today. Still, the bank has no choice other than tightening again given that inflation forecasts are rising further above target through 2024.

“There is a broad consensus that the BCB will deliver the 150 basis-point hike they pledged at the previous gathering. Where dissent starts is on what comes next: we believe that recent comments by the monetary authorities and the rising concerns with the growth outlook will lead the BCB to change its forward guidance, a move that will likely be read as a dovish turn.”

Wednesday’s decision will be published on the central bank’s website after 6:30 p.m. local time in Brasilia, together with a statement from the bank’s board. These are the things to look for:

Investors will pay close attention to board members’ views on how long current price pressures will last. Campos Neto had estimated inflation would peak in September, but it kept accelerating and will likely near 11% in November, its fastest pace since 2003.

Analysts now see consumer prices ending next year above the ceiling of the bank’s tolerance range. On top of that, investors remain concerned about the impact of government spending on inflation, as congress debates a proposal that would boost cash handouts to the poor ahead of next year’s presidential election.

“It’s been inflationary shock after inflationary shock,” said Silvia Matos, an economist at Fundacao Getulio Vargas, a local university and think tank. “We believe international shocks will ease in 2023, and we will be left to deal with only domestic factors.”

If the central bank makes stronger references to 2023, it could signal it’s less willing to further sacrifice growth in order to hit next year’s goal. It targets annual inflation of 3.75% in 2021 and 3.5% in 2022, with a tolerance range of plus or minus 1.5 percentage points.

Financial markets will seek confirmation that policy makers will maintain a tightening pace of 150 basis points at their next meeting in February. “It would create unnecessary uncertainty and pressures on the currency if they started to sound less hawkish,” said Sacha Tihany, head of emerging market strategy for Toronto Dominion Bank.

Most analysts expect a slowdown in the speed of hikes early next year, when the Selic will be in the double digits for the first time since 2017. “We are reaching a point in which they are deciding what will be the peak of the tightening cycle,” said Mirella Hirakawa, an economist at investment firm AZ Quest.

Policy makers have already cautioned against raising rates too fast without knowing for sure how their actions may affect growth in a post-pandemic world. Most analysts expect growth around just 0.5% in 2022, down from 4.7% this year.

Investors expect central bankers will bring back references to Covid-19 in their statement, as uncertainty runs high regarding the impact of the omicron variant. The first cases of the new strain have already been confirmed in Brazil. Additionally, the central bank’s balance of risk is likely to include comments on the impact of the U.S. monetary policy.