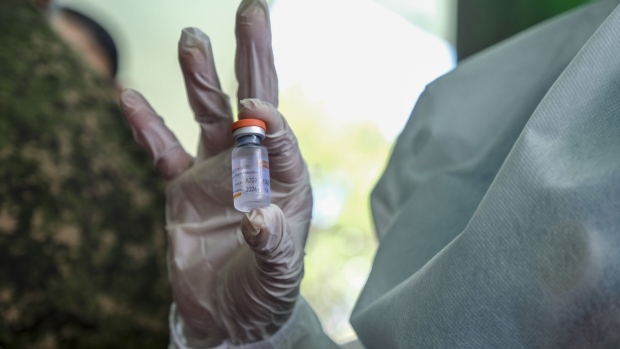 (Bloomberg) -- China’s Sinovac Biotech Ltd, whose coronavirus vaccine is the most widely-used globally with 2.3 billion doses shipped out, said it’s testing its inactivated shot against omicron in a number of laboratory studies.

The update comes as Pfizer Inc., which makes the world’s second-most used vaccine with BioNTech SE, said that neutralizing antibody levels fell against omicron compared to the original strain of the virus, but that a booster shot should provide people sufficient protection.

Beijing-based Sinovac is currently undertaking the same sort of study that Pfizer did, which uses a pseudovirus -- a genetically modified stand-in for the real pathogen, said a company representative on Thursday. That will provide the first and quickest insight into how much potency its shot still retains for omicron. The company declined to say when it would be able to release results.

How well Sinovac’s shot holds up against omicron is a question of significant consequence for much of the developing world reliant on the Chinese vaccine, which is easier to store and administer than the messenger RNA immunizations. While still highly effective at warding off serious illness and death, it protects much less against transmission and symptomatic disease than the mRNA vaccines for the original strain of the virus and for the delta variant.

The company said it has also obtained the omicron variant and is studying how well vaccine-induced antibodies can respond to the live virus.

Concerns are swirling globally that omicron could deal the world a bigger blow than even delta, and the World Health Organization has cautioned that it could fuel surges with “severe consequences.” But a jump in cases in South Africa in the wake of the variant’s emergence hasn’t yet overwhelmed hospitals, leading to some optimism that it may only cause mostly mild illness.