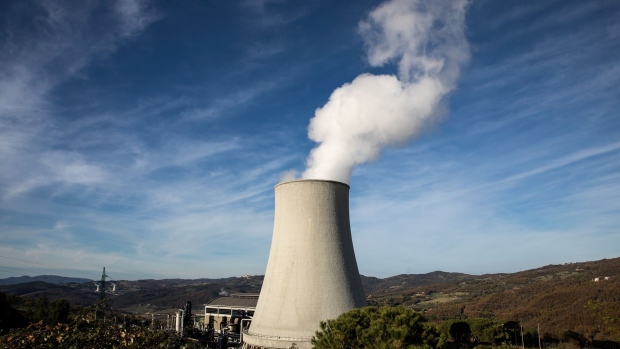 (Bloomberg) -- The world’s biggest owner of publicly traded stocks, Norway’s sovereign-wealth fund, is about to get the political go-ahead to insist that all companies in its portfolio have clear targets for cutting CO2 emissions.

It’s a goal that was enshrined in the 2015 Paris Agreement as an essential step toward preventing catastrophic temperature rises. Norway’s reluctance until now to sign up its wealth fund, which owns about 1.5% of the world’s stocks, has drawn condemnation from climate activists. But as scientists warn that temperatures are rising at a much more dangerous pace than previously feared, the mood -- even in oil-dependent states like Norway -- is changing.

“We want the fund to use active ownership strategies to achieve net-zero across the companies in the portfolio,” Eide said in an interview.

The Oil Majors and Their Emissions

For now, Norway’s wealth fund still holds stakes in some of the planet’s biggest greenhouse-gas emitters, including ExxonMobil Corp. and Chevron Corp., according to the latest regulatory filings compiled by Bloomberg. The fund itself has previously sought permission from Norway’s parliament to exit all oil stocks for diversification purposes. But it was only allowed to do a partial divestment.

Eide said he’s not expecting to ask the fund to dump fossil-fuel stocks from one day to the next. But he said oil companies without ambitious net-zero goals will be in the crosshairs. They’ll need to have “credible and accountable plans,” he said.

Labor’s plan to have the wealth fund target net zero follows a government-commissioned report that provided a list of recommendations on climate risk. It advised introducing carbon-reduction goals for the fund consistent with the Paris agreement. Labor is still in talks with potential coalition partners and has yet to form a government. But it’s likely to get its way on the net-zero target, given its dominance in parliament.

Martin Skancke, the lead author of the climate-risk report, said that for big emitters, net-zero should encompass so-called Scope 3 targets, which include the emissions of end users.

“If Scope 3 is significant -- for example, if you’re an oil company -- then it’s clear that Scope 3 emissions are decidedly the most important for your emissions, because they’re huge,” Skancke said in an interview.

Eide says companies that “want access to capital from the world’s biggest sovereign wealth fund will need to take note.”

Not long after winning the Sept. 13 election, Labor representatives met with Christiana Figueres, the former executive secretary of the United Nations Framework Convention on Climate Change and the person who ushered in the Paris accord half a decade ago. She’s been a vocal critic of wealth funds -- most of which are built on the money of petro-states -- for failing to sign up to net-zero emissions goals.

Figueres has argued that if Norway makes its sovereign investment vehicle embrace carbon neutrality, others in the $10 trillion wealth-fund universe will follow, representing a seismic shift in capital flows that would help cut carbon emissions. In a recent interview, Figueres said that Norway’s “example would be noted all over the world.”