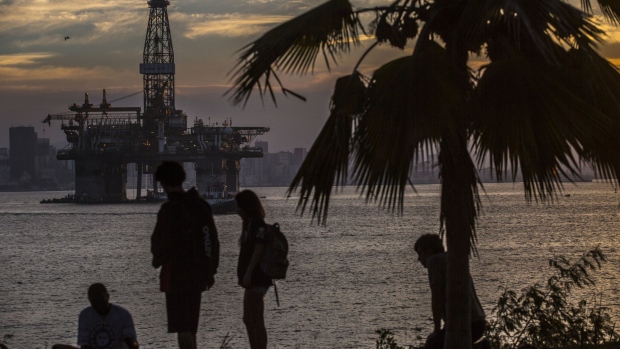 A Queiroz Galvao SA offshore oil platform is seen in an aerial photograph taken above the Guanabara Bay near Niteroi, Rio de Janeiro state, Brazil, on Thursday, April 26, 2018. The Brazilian Institute of Geography and Statistics (IBGE) is scheduled to release industrial production figures on May 3. , Bloomberg

An auction next month of oilfields in Brazil may be the priciest ever held, raising at least US$50 billion in licensing fees and compensation, according to people familiar with government estimates.

Exxon Mobil Corp., Royal Dutch Shell Plc and other energy giants are set to vie for deep-sea deposits that could hold 15 billion barrels of oil, almost twice as much as Norway’s reserves. Winners at the Nov. 6 auction are expected to pay US$25 billion in licensing fees, plus share a portion of their production with the government.

In addition, bidders will need to negotiate payments to state-controlled Petroleo Brasileiro SA for investments it has already made in the area. Those payments could add another US$25 billion to US$45 billion in costs, according to officials familiar with government figures who asked not to be named because the information is private.

The auction is unique in part because one of the four areas being offered is already gushing more than half of the daily output from Venezuela. It’s a rare opportunity for an industry more accustomed to exploring riskier offshore prospects that can take a decade or more to develop.

Fourteen producers -- including Petrobras -- have signed up to participate in the auction.

Petrobras didn’t respond to requests for comment. The Brazilian oil regulator, known as ANP, declined to comment on the total amount the auction could raise. It said payments to Petrobras will be negotiated between the company and its partners, without government interference.

The offerings are at the heart of the pre-salt, a giant expanse of oil deposits about the size of Ohio trapped beneath a layer of salt under the Atlantic seabed. The four prospects -- Buzios, Itapu, Sepia and Atapu -- are estimated to hold as much as 15 billion barrels of recoverable crude, according to a study by Houston-based consultancy Gaffney, Cline & Associates.

Buzios is already Brazil’s second-largest field by production, with output of about 425,000 barrels a day -- at a time when Venezuelan production is running at 700,000. It has four platforms that are tapping about a dozen wells, with room for other wells to be drilled and the current ones to be ramped up further.

Brazil’s federal audit court estimates the compensation to Brazil’s oil company could reach US$45 billion under proposed guidelines. It has recommended the government lower certain parameters like the estimated price of Brent crude to make the deals more attractive, according to the people familiar. The court’s estimates and recommendations for the sale are confidential.

The Brazilian Petroleum Institute, an industry group that represents some of the bidders, estimates the payments to Petrobras will be worth between 120 billion and 130 billion reais (US$29 billion-US$31 billion). A study by Wood Mackenzie Ltd. released Monday estimates US$24 billion.

The rules do not specify how the payments to Petrobras should be settled. A combination of cash, crude and investments over many years is a possibility. Licenses last for three decades. Winning bidders will have 18 months to reach an agreement with Petrobras before the oil regulator is required to step in as mediator.

As for the licensing payments, the largest chunk of the US$25 billion will be due this year and the remainder in 2020, all in cash.

A 2009 auction of development rights for Iraqi oil included larger reserves, but was done using different methodology under which companies were bidding for the right to service the oil fields and get paid per barrel by the government.