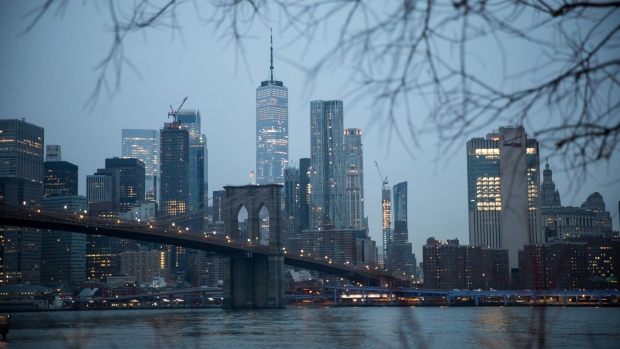 The lower Manhattan skyline and the Brooklyn Bridge are seen from Main Street Park in the Brooklyn borough of New York, U.S., on Tuesday, Feb. 4, 2020. U.S. stocks surged as the rally in risk assets entered a third day on rising bets the coronavirus won't derail the global economy. Photographer: Michael Nagle/Bloomberg , Bloomberg

From New York to Paris, Sao Paulo to Hong Kong the losses are unprecedented for the world’s wealthiest.

The world’s 500 richest people collectively lost US$331 billion on Thursday, the biggest one-day drop in the eight-year history of the Bloomberg Billionaires Index. That pushed the group’s year-to-date losses to US$950 billion.

This week’s collapse marks the end of a decade of soaring markets and cheap money that helped the planet’s wealthiest people amass a record US$6.1 trillion less than two months ago. Those gains were obliterated over the past four days as pandemic fears and plunging oil prices sent markets into a nosedive.

Since the first of the year the world’s richest have lost 16% of their collective net worth, according to the index. The market meltdown has slammed billionaires from every part of the globe and every industry.

“People right now are afraid,” said Charles Doraine, president of Doraine Insurance Group and a former wealth manager. “Things are being introduced to the world of investing that have never been there before -- health risks. This is stuff beyond the market’s normal fears and concerns.”

The anxieties of the super rich are evidenced by a spike in demand for private jets, canceled charity galas and an exodus to secluded second homes. Global measures to limit the spread of Covid-19 have introduced restrictions rarely experienced by a globe-trotting elite for whom access and services are seldom constrained. On Thursday, wealthy travelers scrambled to book private flights to the U.S. from Europe ahead of President Donald Trump’s recently-announced travel restrictions.

Trump’s rhetoric-laden address to the nation on Wednesday evening did little to calm investors, contributing to a further slide in stocks and trimming the wealth of some of his major supporters.

Oklahoma fracking mogul Harold Hamm dropped off the index Monday after losing almost half his net worth, squeezed by the tumbling price of oil. Sheldon Adelson, majority owner of Las Vegas Sands Corp., the world’s largest casino operator, has lost US$11.7 billion since the start of the year as gaming floors emptied and trade shows were canceled. That’s more than a quarter of his net worth.

Carnival Corp. Chairman Micky Arison dropped six spots on the billionaires index Thursday after shares of the world’s biggest cruise operator plunged 31% to a 23-year low. The company announced it was suspending all voyages by its Princess Cruises line for two months.

Individuals higher up the ranks sustained staggering one-day losses. Luxury titan Bernard Arnault, chairman of LVMH, lost US$9.5 billion and Amazon.com Inc.’s Jeff Bezos’s net worth fell by US$8.1 billion. A total of 53 billionaires saw their fortunes drop to the lowest since joining the index.

Brazil’s fortunes were particularly hard hit, both by plunging stock prices and a weakening real. Guilherme Benchimol, founder of XP Inc., ceased to be a billionaire after shares of the Sao Paulo-based brokerage fell 34% below its December initial public offering price.