More selling ahead, but with a bit more order

Some of the world’s wealthiest people spent more than US$1 billion combined to boost their stakes in companies as markets around the world tumbled.

Equity indexes across the globe have plummeted in recent weeks, largely over uncertainty about the long-term impact of the coronavirus outbreak. Some airlines and retail mall operators have lost more than half their value.

But corporate executives, board members and large shareholders have been buying stock in their companies at the largest rate relative to sales since 2011. Some, like Bill Ackman, are optimistic that equities will rebound quickly as long as measures to halt the spread of the virus are strengthened and ultimately prove successful.

“These are bargains of a lifetime if we manage this crisis correctly,” Ackman, founder of Pershing Square Capital Management, tweeted Wednesday, conditioning that on a temporary shutdown and closing of U.S. borders. 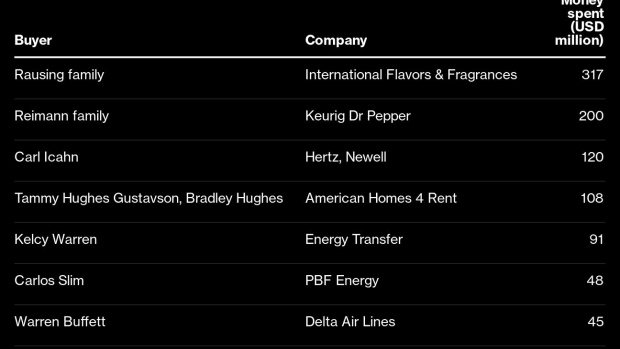 Still, the outlook for a rapid recovery is far from clear-cut.

A federal government plan to fight the coronavirus included the assumption that the pandemic would last 18 months or longer, and would involve several waves of infections. The March 13 plan said federal authorities and individual consumers will likely experience “significant shortages” as supply chains are affected.

Transmission of the virus may pick up again once social distancing restrictions are eased, according to a March 16 report from the Covid-19 response team at London’s Imperial College. Additional efforts at distancing of entire populations could put further strain on economies.

For some, it didn’t take a global pandemic to start buying. The Rausing family, who are the beneficiaries of a trust that owns Tetra, have been accumulating stock in IFF for several years. Energy Transfer LP founder Kelcy Warren has spent several hundred million dollars over the years buying stock in the pipeline empire.

While it’s not uncommon for founders or heirs of family businesses to buy shares in their companies during slumps, corporate executives and board members do so less frequently.

Many of them already receive the bulk of their compensation in equity. So in the rare instances they do buy, it’s usually more about demonstrating their confidence in the business than making opportunistic financial bets.

And plenty of corporate insiders are selling -- even with the drops in equity indexes. Last week, George Yancopoulos, chief scientific officer of Regeneron Pharmaceuticals Inc., unloaded shares worth millions of dollars, while Microsoft Corp.’s Satya Nadella sold stock on March 3. Both transactions were part of scheduled trading programs.