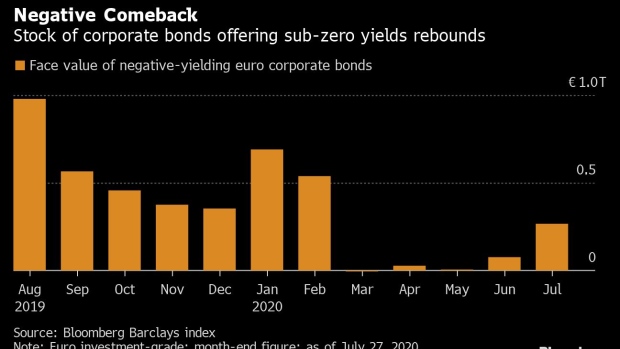 (Bloomberg) -- The world’s pile of debt with a negative yield -- bonds that cost investors money simply by holding them -- has climbed to near the $15 trillion mark, prompting investors to take on more risk.

Potential returns across the bond market have become increasingly scarce, following the coronavirus crisis and asset purchases by central banks. While still short of a $17 trillion peak last year, the mountain of negative-yielding debt is set to climb for a fourth month, matching 2019’s record streak, according to Bloomberg Barclays indices.

“Investors are desperately trying to find yield somewhere,” said Jan von Gerich, chief strategist at Nordea Bank Abp. “At times there are reminders of the risks involved, but it seems in the current environment such news is merely a temporary setback in the bigger picture of contracting risk premia.”

Europe is at the heart of the phenomenon, with the rate on all of Germany’s bonds below 0%, and now even some of Italy’s, considered among the region’s riskiest. Those on U.S. Treasuries are still positive, though short-term yields aren’t far off after hitting record lows Friday.

Central banks are pumping in record amounts of money into the bond market to help ease the economic damage caused by the coronavirus. The European Central Bank’s pandemic program totals 1.35 trillion euros ($1.58 trillion), while the Federal Reserve is buying about $80 billion a month.

And the move to lower rates may not have finished. Traders in money markets are pricing the Bank of England will cut interest rates from 0.1% to 0% by March next year. Fed officials are meeting this week, though probably won’t adopt a shift in strategy after Chair Jerome Powell said rates will stay near zero for a long while.

German 10-year yields are currently hovering around minus 0.48%, while U.K. and Japanese bonds out to seven years have yields below 0%. Japan’s 10-year is just two basis points above the threshold. Those on Treasuries are at 0.57%, having touched a record low of 0.31% in March.

The trend has also been mirrored in the corporate bond world. Negative-yielding euro corporate bonds now amount to 267 billion euros, based on data compiled by Bloomberg. It would take a 25-basis-point drop in average yields to boost this number by another half a trillion euros.

It was a different story back in March, when investors were dumping corporate bonds, fearing that the effective shutdown of large parts of advanced economies would impact companies’ ability to pay back their debt. That led the amount of corporate bonds quoted at a negative yield to fall to zero.

“With central bank accommodation likely to continue even as peak pandemic fears fade, it means that this negative-yielding environment is one that investors will have to get used to and adapt for,” said Mohammed Kazmi, a portfolio manager at Union Bancaire Privee. He favors U.S. dollar corporate bonds, which remain far away from the 0% threshold.