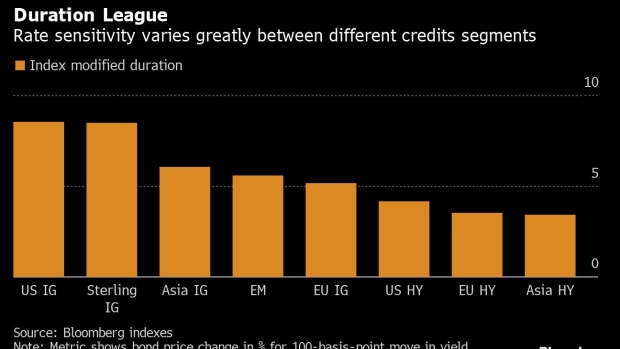 (Bloomberg) -- The safest corporate bonds in the world are having their worst start to the year in just over two decades as investors brace for tighter monetary policies.

A global index of investment-grade company debt has posted total return losses of 2.2% since the start of the year, the most since data going back to 2000. The gauge is faring worse than all others in the category of credit securities outside of emerging markets.

With yields on Treasuries to German bunds this week rising to levels last seen before the pandemic, investment-grade debt’s vulnerability to rate-hike bets is in focus. These borrowers typically issue longer-maturity bonds, and their greater duration -- a measure of price sensitivity to rate moves -- spurs steeper drops as yields climb.

“When you go from a bull market to something more bearish,” investment-grade bonds is where it starts, said Viktor Hjort, global head of credit strategy at BNP Paribas SA said in an interview. “As we reach some of the inflection points in the market cycle, the IG corporate bond market will be hit first.”

Other market dynamics are adding to the pressure. BNP Paribas’s Hjort anticipates a jump in bond issuance this year as companies need to invest in infrastructure and supply centers, among other projects. At the other end, demand from central banks may ease, especially as the European Central Bank prepares to wind down its pandemic bond-buying program in March. This supply-demand imbalance can boost risk premiums.

Investors are taking note. Pacific Investment Management Co. is reducing the share of corporate bonds in its credit portfolios, even though it’s overweight in the credit market, according to a recent cyclical outlook. Instead, it’s looking at credit-default swaps and structured credit, such as non-agency mortgage-backed securities, according to Eve Tournier, credit portfolio manager.

“As well as offering diversification, these can improve the convexity of our portfolios through their defensive qualities,” she said in an interview, referring to a measure of interest-rate risk.

Indeed, baskets of credit-default swaps -- contracts that provide insurance against corporate defaults --  have been much more resilient this year. Both in North America and Europe, total return losses for investment-grade CDS indexes this year are a fraction of bond returns.

For some, the selloff in investment-grade bonds may offer buying opportunities.

The rout in some sectors “looks a bit extreme,” said Nachu Chockalingam, a senior credit portfolio manager at Federated Hermes, which oversees 466.8 billion pounds ($636 billion). Financial issuers should benefit from the move in rates, and some borrowers’ yield curves seem too steep after 10-year securities underperformed intermediate maturities, she added.

She concurs, however, that the high-grade slump can be justified by spike in government yields and increased supply of bonds. And with inflation readings surprising to the upside, bets for faster, sooner policy tightening are growing in the developed world.

Chinese developer Greentown China Holdings is kicking off a sale of “credit enhanced” green dollar bonds, which will be a key test of appetite for the embattled real estate sector.

Wall Street banks borrowed heavily after reporting earnings, locking in funding ahead of Fed rate hikes and the potential for further interest-rate volatility