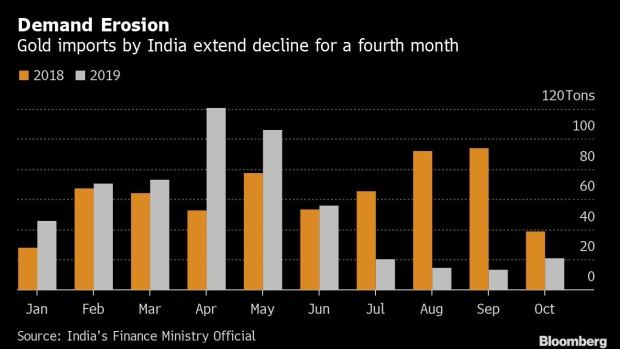 (Bloomberg) -- Gold imports by India fell for a fourth month in October even as the biggest buying day failed to lift sluggish demand in the world’s second-largest market.

Imports fell 46% from a year earlier to 20.8 tons in October, according to a person familiar with the data, who declined to be named as the information isn’t public. Still, that’s higher than September’s 13.5 tons, the lowest monthly inflow in at least three years, data compiled by Bloomberg shows.

Consumption in India is forecast to drop to the lower end of a 700 to 750 ton range this year, the lowest since 2016, as a surge in prices coupled with a weak economy keeps buyers away, according to the World Gold Council. Benchmark gold futures in Mumbai have jumped more than 20% this year and touched a record of 39,885 rupees ($562) per 10 grams in early September.

The final quarter is typically the strongest for gold demand in India when a raft of festivals coincides with the peak wedding season to push up sales. This year sales on Dhanteras, the most auspicious day in the country to buy the metal, slumped even as jewelers lined up offers to draw in buyers.

Slowing sales in the local markets saw profit at Titan Co., India’s biggest jeweler by market value, miss estimates and prompted the Tata Group unit to slash its jewelry sales growth guidance for October-March to 11%-13% from an initial forecast of 20%.

To contact the reporters on this story: Shruti Srivastava in New Delhi at ssrivastav74@bloomberg.net;Swansy Afonso in Mumbai at safonso2@bloomberg.net