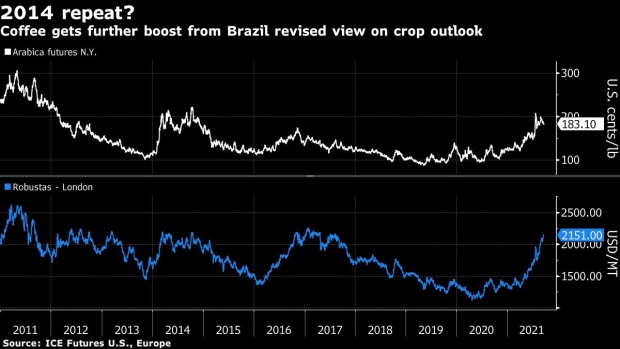 Coffee beans in a roasting facility in Caconde, Sao Paulo state, Brazil, on Wednesday, Aug. 25, 2021. Extreme weather is slamming crops across the globe, bringing with it the threat of further food inflation at a time costs are already hovering near the highest in a decade and hunger is on the rise. Photographer: Jonne Roriz/Bloomberg , Bloomberg

(Bloomberg) -- Normally in September, Brazilian coffee farmers would be filling warehouses to the brim with the world’s biggest harvest of gourmet beans. Trucks often wait in queues for an entire day to get their cargo.

This year, the crop is so small that the long lines of trucks have all but disappeared.

Brazil probably harvested nearly 40% less arabica coffee than last year, and the least amount since 2009, according to crop forecasting agency Conab. The loss is equivalent to about two thirds of U.S. consumption, and Americans drink the most coffee in the world. The dramatically lower production could mean shortages coming for the beans.

“There’s no line of trucks waiting to load coffee at the warehouses,” said Regis Ricco, a director at Minas Gerais-based RR Consultoria Rural. “Farmers send a truck with coffee to the warehouses, and a few hours later the truck is back, when normally it would take as long as a day. It is alarming.”

The fact that Brazil’s crop keeps shrinking means prices will keep rising for consumers that want a gourmet morning brew. Expensive coffee is just one of many commodities seeing inflation, stoking concerns about rising food costs around the globe.

Brazil’s crop was hurt by drought in multiple locations, combined with frosts and freezes in July. Adding to that, the nation’s crop fluctuates each year between a low and high-yielding cycle, and this year was a smaller one.

Arabica futures have gained 44% so far this year on ICE Futures U.S. in New York.

The gourmet coffee shortages have already driven roasters in Brazil to shift to robusta, a more bitter tasting, cheaper variety of beans. Coffee blends that were half robusta will be as high as 90% this year, said Marcio Candido Ferreira, a director at Espirito Santo-based trader Tristao Cia. de Comercio Exterior.

Although the robusta harvest is at a record in Brazil, it’s completely sold out as buyers race for supplies, Ferreira said.

There’s little relief seen coming. Even before the devastating frosts in July, the U.S. estimated Brazil’s stockpiles at the lowest in decades. The adverse weather will severely hurt the next two arabica-coffee crops, with droughts being twice as destructive as frost, Jose Donizete Alves, a researcher at Lavras Federal University, said at an industry conference Tuesday. The country’s dry season is forecast to start earlier than usual next year, according to Luiz Carlos Molion, a meteorologist.

Still, coffee price spikes have historically been transitory. Rallies around 60% have been the threshold for more supply to come on and cap prices, according to Bloomberg Intelligence.

(Updates with commentary in 12th paragraph.)