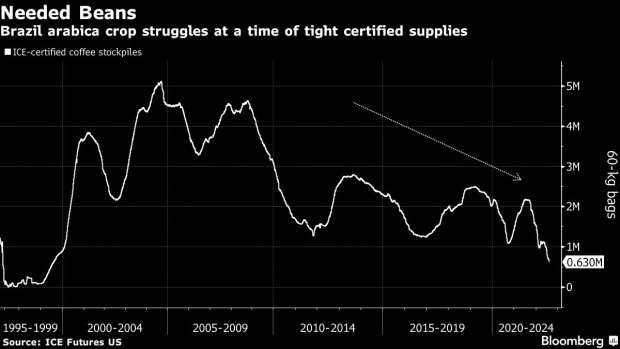 Farmers check on coffee plants destroyed by frost during extremely low temperatures near Caconde, Sao Paulo state, Brazil, on Wednesday, Aug. 25, 2021. Extreme weather is slamming crops across the globe, bringing with it the threat of further food inflation at a time costs are already hovering near the highest in a decade and hunger is on the rise. , Bloomberg

(Bloomberg) -- Arabica farmers in Brazil, the world’s top exporter, are seeing bigger-than-expected losses for a coffee crop that already had setbacks due to freakish weather, bringing lower yields that threaten to extend a global supply crunch.

Luis Fernando Ferreira da Silva, a grower in Brazil’s top producing Minas Gerais state, expected this season’s crop to be cut by more than half after drought and frost hit his farm last year. He initially expected to reap 8,000 60-kilogram bags, but later slashed his estimate to 3,500 bags. Things ended up even worse.

“Now I believe it won’t reach 2,000 bags,” da Silva said in an interview. “It was definitely a year to forget.”

Growers and analysts are seeing signs of yields suffering more than anticipated from the lingering effects of bad weather that slashed last year’s output and sent global coffee prices soaring. Arabica futures have surged about 80% in the past two years, when second-ranked supplier Colombia also saw its crop slashed by too much rainfall. Brazil’s diminished outlook may keep prices elevated for coffee lovers and chains like Starbucks Corp.

Brazil’s drought and cold curbed flowering last season and severe frosts in July 2021 led farmers to cut down coffee trees at a time of high costs for agricultural inputs, notably fertilizer. That not only slashed last year’s crop but also curbed the potential for 2022, which is supposed to be the higher-yielding cycle of Brazil’s harvest.

“Farmers believe there will be a significant crop failure in the current season,” compared with the last high-yielding cycle two years ago, Margarete Boteon, an agricultural researcher at the University of Sao Paulo, said in an Aug. 2 report.

Yields are below expectations in most arabica regions and the cherries are husky with smaller-than-usual beans inside, said Regis Ricco, a consultant who recently visited the main producing areas. While remaining crops look beautiful and leafy, yields have disappointed when fruits get processed into coffee beans, he said.

Consequently, more beans are needed to fill a bag this year. While 420 liters of beans are usually needed to make a 60-kilogram bag, harvest reports suggest an average of 570 liters are now required, he said. Brazil’s output may barely reach 32 million bags this year -- down from 38 million bags expected in March and well short of the potential of around 53 million bags for the high-yielding cycle, according to Ricco.

Labareda Agropecuaria, a big producer in the Mogiana region of Sao Paulo, has also been surprised by harvest results. Output is now seen to be 20% below what was expected at the beginning of the year, according to Gabriel Lancha Alves de Oliveira, the company’s commercial director. The additional cut to its estimate means the harvest will be 40% below its potential.

“If that trend is confirmed nationally, it would signal an arabica crop below the preliminary expected potential,” said Gil Barabach, analyst for Safras & Mercado consulting firm.

Private and co-operative warehouses are “very empty which is uncommon for this time period,” said Joao Prata Pereira, a partner at a Minas Gerais exporting company bearing his name, The firm cut its crop estimate by 5% last month.

Brazil’s national supply company, known as Conab, projected this year’s arabica output at 35.7 million bags in May, which was down from its January estimate of 38.8 million bags. While the estimate signals a recovery from 2021, production will be 27% lower than the previous high-yielding year of 2020. The agency will issue an update on Sept. 20.

Lower yields indicate less supply available to process beans into washed arabica, which is costly, and that will keep inventories low at ICE Futures US, supporting elevated prices, said consultant Judy Ganes, who has toured Brazilian fields several times the past year to assess the health of the crop.