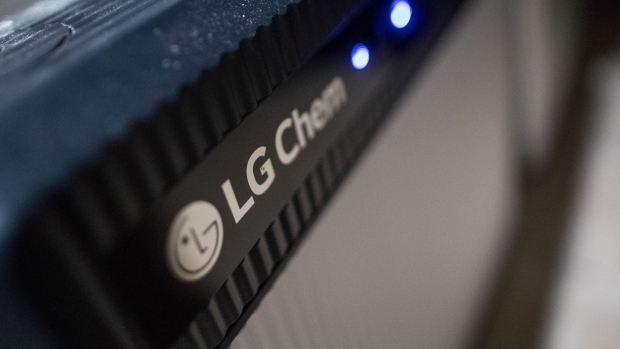 An LG Electronics Inc. Chem battery which forms part of a Lightsource BP smart home solution sits in the loft of a residential property in Dorking, U.K., on Friday, May 3, 2019. Companies like Lightsource, in which British oil major BP Plc holds a stake, are trialing smart systems in people’s homes that will that will do everything from generating solar power, storing it and managing consumption. Photographer: Chris Ratcliffe/Bloomberg , Bloomberg

The business, the top maker of batteries globally, will be 100% owned by LG Chem and be separated as of Dec. 1, the company said Thursday. LG Chem is weighing an initial public offering for the business, to be called LG Energy Solution Ltd., with a decision to be made later. A shareholder meeting to seek approval will be held on Oct. 30.

The move lets LG Chem put more focus on its fastest-growing business, while allowing investors to place targeted bets on its batteries. LG Chem is predicting annual revenue growth of more than 30% for the unit as key customers such as Tesla Inc. and Porsche Automobil SE boost EV sales.

“The split is good for the battery unit because it can focus on its main business,” said Wooho Rho, an analyst at Meritz Securities Co. in Seoul. “The unit’s value has been undervalued because it’s part of LG Chem.”

Shares of LG Chem fell as much as 9% in Seoul, the biggest intraday drop since March, and were down 6.1% as of 2:09 p.m. in Seoul. The decline was due to LG Chem taking steps toward exiting the lucrative battery business, Rho said. LG Chem has more than doubled this year, compared with a 9.5% gain in the benchmark Kospi index.

The company has grabbed the battery-market lead this year, overtaking China’s Contemporary Amperex Technology Co. Ltd. and Japan’s Panasonic Corp., according to SNE Research. LG Chem held 25.1% of the market in the first seven months of 2020 as sales almost doubled to 13.4 gigawatt hours, SNE said. That compared with a 10.6% share a year ago.

Yet the value of LG Chem’s battery business is about 40% to 50% below that of CATL, Yoon Jae-sung, an analyst at Hana Financial Investment Co., said in a report. LG Chem as a whole has a market value of about $39 billion, compared with $67 billion for CATL and $23 billion for Panasonic.

“Given its earnings outlook, there is no reason why the battery business’s value wouldn’t be at par or even more than CATL,” Rho at Meritz said.

LG Chem expects the unit’s sales to grow to 30 trillion won ($26 billion) in five years, from a projected 13 trillion won this year. The division’s second-quarter operating profit of 155.5 billion won was the biggest since the fourth quarter of 2018.

The company has plants in South Korea, Poland, the U.S. and China and is expanding production. It said in July that it expects battery capacity to reach 100 GWh this year and 120 GWh in 2021.

LG Chem agreed last year to set up a 50-50 venture with Geely Automobile Holdings Ltd.’s unit Shanghai Maple Guorun Automobile Co. to produce and sell batteries. In December, it agreed with General Motors Co. to jointly invest $2.3 billion in a new EV battery plant to be built in Lordstown, Ohio.

“With the split, the company can focus on the battery business and will be able to enhance its management efficiency that will lead to better value for shareholders,” LG Chem said in a statement. “The new unit will be able to raise funds through its operations as demand for EV cars are on the rise.”

(Updates with comments from analyst starting in fourth paragraph.)