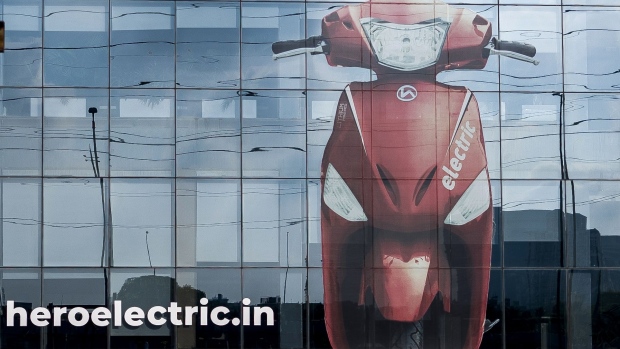 The electric scooter, launched under the brand Vida, will cost 145,000 rupees ($1,761) and deliveries will begin from the second week of December, according to a statement Friday. A plant in the southern Indian state of Andhra Pradesh is producing the electric vehicle, which will have a range of 143 kilometers (89 miles) and 165 kilometers for its two variants.

Electrification in India is being driven by two-wheelers as the high price tag of battery-powered cars puts them out of most consumers’ reach. Decarbonizing two-wheelers, which account for over 70% of total vehicles in India, will help the world’s third-biggest emitter of greenhouse gases tackle its toxic air.

By 2030, around 30% of all vehicles sold in India will be electric but they will mostly be two- and three-wheelers, while electric passenger cars will make up only about 5% of total EV sales, consultancy Arthur D. Little estimates.

To accelerate the shift to cleaner vehicles, Hero MotoCorp is teaming up with global companies. It has formed a joint venture with Taiwan-based Gogoro to build battery-swapping stations across India. In addition, it plans to build charging networks for the two-wheeler segment with fast chargers, Hero MotoCorp said in the statement.

The company last month said it is finalizing an agreement with California-based Zero Motorcycles to develop electric motorcycles.