1 in 3 remote workers to look for new job if required to return to office full-time: Survey

Traffic is returning to the city streets. Elevators are getting crowded. Favorite lunch spots are filling up. Two months after Israel reopened its economy, Tel Aviv is moving on from the work-from-home era.

Israel’s lightning-fast vaccine program gave it a headstart in planning for life after coronavirus, and its quick rollout turned it into a global test case on everything from real-world efficacy data to vaccine passports. With commercial activity now heating up in Tel Aviv, employers and employees around the world are watching with interest to see what happens in a country that has come to be seen as a late-pandemic bellwether.

Early signs are that the end of lockdown has flicked the switch on office life. Demand for space is picking up across the board, according to data tracked by commercial real estate outfit Natam Group. Co-working provider WeWork says footfall in its Israeli buildings is up 20 per cent since February, with strong demand for new sales. Google’s mobility data shows a sharp increase in travel to work in Tel Aviv during April, with numbers now close to their pre-pandemic baseline. 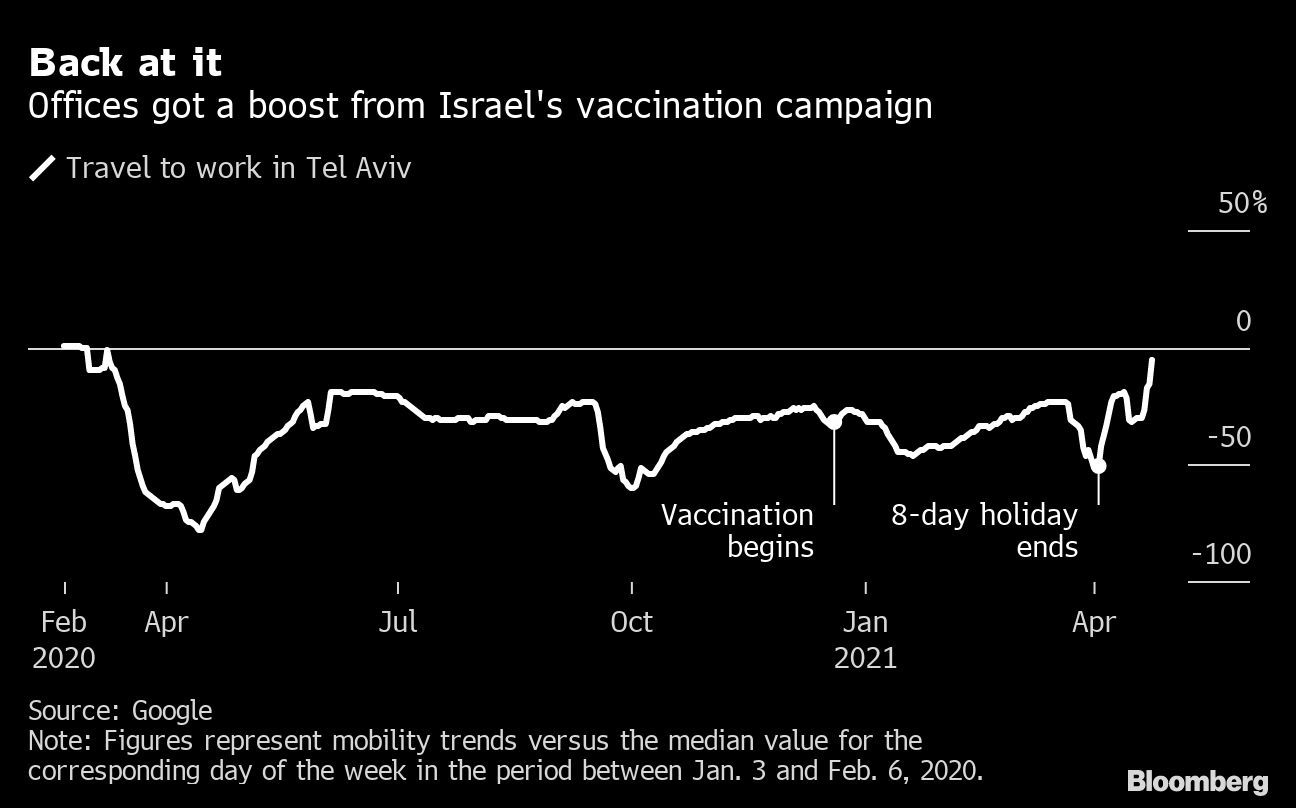 Nir Minerbi got the first sign that things were about to change back in December, when he tried — and failed — to renew the discounted deal he struck with WeWork during 2020’s initial lockdown.

Being in the office last year was like “being at a graveyard,” said Minerbi, chief executive officer of quantum computing firm Classiq Technologies. He’s keen to revive the camaraderie of face-to-face working, so has signed an interim contract with a smaller co-working space while looking for a more traditional long-term office lease.

While COVID-19 continues to ravage India and cases accelerate around the world, countries with high vaccination levels are taking first their steps towards reopening. Australia and New Zealand kept COVID-19 at bay, though many office-based employees remain at home. In the U.K., where working from home is recommended until at least June 21, some 42 per cent of employees were at their desks in April, according to Morgan Stanley research. That figure is higher in Europe. In the U.S., New York will soon lift many pandemic restrictions, and major banks are planning a resumption of office life.

Tel Aviv offers a glimpse for other economic hubs of what work may look like soon, as workers and employees alike seek to rekindle the sense of community they lost last year.

“There’s a huge bounce back,” Dotan Weiner, chief operating officer at Labs, a co-working firm owned by Israeli billionaire Teddy Sagi, said in an interview. “Companies are telling us that without the office, it’s harder to recruit and maintain their culture.”

Footfall at Labs’ Israel site is now back to over 95 per cent of total capacity, Weiner said, up from a low of 15 per cent in 2020’s first lockdown and 40 per cent in the second. Weiner was five minutes late to his interview, a tardiness he blamed on “elevator traffic.” Labs is in talks to open two more Tel Aviv locations in the next two years, he said.

Labs also operates 12 buildings in London, and Weiner is similarly optimistic for business prospects in the English capital. Weiner expects a somewhat slower return than in Tel Aviv, with Londoners seen as reluctant to flock back onto public transport networks.

The U.K. has broadly tracked Israel’s path through the pandemic, locking down and reopening a few weeks behind the Middle Eastern nation. With case numbers now low and vaccination rates high in both countries, the U.K. appears on course to reopen its economy fully in late June.

Nevertheless, even in Israel many companies are yet to settle on a definitive balance between working from home and returning to the office.

Check Point Software Technologies Ltd., one of the country's largest employers, has seen attendance double recently to about 35 per cent of its 2,400 workers at its Tel Aviv headquarters, said Nirit Schneider, head of real estate and operations. While that is still a steep drop from before the pandemic it covers a significantly larger group of people, with most splitting their working week between home and office.

More than half the cyber security giant’s workforce is outside Israel, where Check Point has been trying to shorten contracts and swap desks for meeting rooms. Face-to-face contact is now the main reason for people to show up to the office, Schneider said.

The new need for adaptability is driving change in Israel’s commercial real estate sector. Co-working provider Mindspace is shifting towards what it calls a “partnership” model with landlords, handling rental agreements with tenants on behalf of landlords in a bid to minimize the risk of a falling market.

“Companies don’t know what to do with their real estate strategy,” Mindspace CEO Dan Zakai said. “That’s why we’ll see an increase in flexible contracts.”

At Classiq, Nir Minerbi understands that some of his team are still scarred by the pandemic and prefer a more tightly controlled office experience than they can get at a co-working venue.

“People don’t love crowded working areas anymore,” Minerbi said. “Even if it isn’t 100 per cent full, some of our employees want a place where they feel they can breathe.”