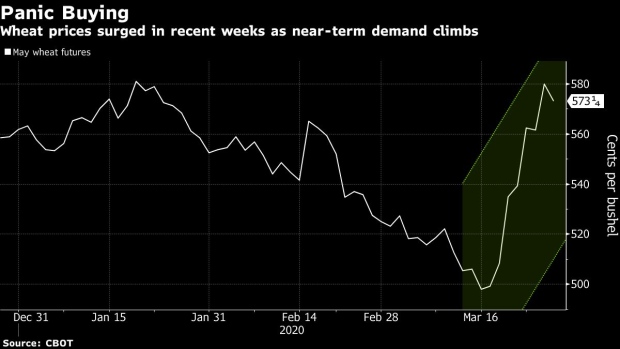 Ears of wheat grow in a field during a harvest in Rettendon, U.K., on Friday, Aug. 2, 2019. Uncertainty over Brexit is slowing investment in British farming. Photographer: Chris Ratcliffe/Bloomberg , Bloomberg

(Bloomberg) -- Consumers may be hoarding staples like flour and bread amid the coronavirus crisis, but once the panic buying ends, the world will probably still have a huge stash of wheat.

That’s according to the International Grains Council, which left its projection for this season’s wheat stockpiles unchanged despite a surge in consumer demand. Because farmers should be able to complete plantings as planned, the upcoming harvest will increase and push inventories up about 3% to a record 283 million tons next season.

“Some commodities have seen a sharp upturn in nearby demand, especially for rice and wheat-based foods,” the council said in a report on Thursday. But “weakening economic conditions could dampen usage in the longer term,” especially for industrial goods, it said.

The IGC warned the outlook may change once the pandemic’s duration is better known. Plus, the increase in wheat stockpiles is being driven by China and India, which don’t typically supply other nations. Inventories of all grains, including crops like corn and barley, will remain little changed next season.

Global shippers are also facing logistical hurdles in transporting some farm goods amid the outbreak. The United Nations’ Food & Agriculture Organization cautioned that import-dependent countries are particularly vulnerable to slowing trade and said that retail food prices may rise around the world.

“Beggar-thy-neighbor policies, which popped up in the form of higher export taxes or outright export bans by some countries during the global food price crisis of 2008, must be prevented,” the FAO said. “They tend to produce copycat reactions, and they make things worse for everyone, not just for smaller trading partners.”