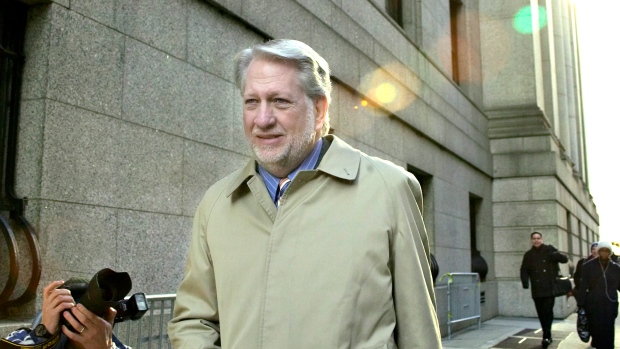 Bernard Ebbers, the former WorldCom Inc. chief executive officer, was ordered freed from prison, almost eight years before he was due to be released.

A federal judge in Manhattan on Wednesday granted compassionate release to Ebbers, who has served more than 13 years of a 25-year sentence for orchestrating an $11 billion accounting fraud that bankrupted the company. U.S. District Judge Valerie E. Caproni said Ebbers’s health is failing and that letting him out early doesn’t minimize the impact of his punishment.

Relatives of the 78-year-old reacted with jubilation in court.

“We’re elated and just very grateful not only for Mr. Ebbers but especially for his family,” Graham Carner, their lawyer, said after the hearing. “All they wanted was for him to live out his time with them.”

Ebbers was sentenced in 2005 for overseeing the fraud, which hid costs and shifted reserves to boost the company’s profits. After the scheme came to light, investors lost $180 billion in what was the largest bankruptcy in U.S. history in July 2002.

The former CEO was scheduled to be released in July 2028 with credit for good behavior. It isn’t immediately clear when he will leave prison.

Attorneys for Ebbers’s family asked Caproni in September to free him due to a host of health problems, including macular degeneration that has left him legally blind and a heart condition that makes him vulnerable to cardiac arrest. The U.S. Bureau of Prisons had denied a request from Ebbers’s daughters under the 2018 First Step Act, which allows some federal inmates to be released if they are over 60 years old and face terminal illnesses.

While Caproni noted that records “suggest some exaggeration of his mental condition” that led her to believe Ebbers was trying to manipulate her, she also expressed concern that he’s malnourished, appears to have lost almost 60 pounds since last year and has a persistent bedsore.

“There’s no excuse for that,” Caproni said.

Carner had urged the judge to free Ebbers, pointing out that his mental and physical condition has “significantly worsened” in the past 3 1/2 months, with his weight dropping from more than 200 pounds last year to 147 pounds earlier this month. He is also incontinent and anemic and, in the past month, has suffered four falls and been hospitalized three times, Carner said.

Ebbers’s request was supported by Barbara Jones, the former judge who sentenced him in 2005.

Prosecutors argued that Ebbers should remain in prison, saying that medical officials can manage his conditions and provide him with 24-hour care. Assistant U.S. Attorney Jason Cowley told Caproni that allowing Ebbers to go free early “would send a terrible message to the rule of law.”

”The scope and seriousness of Mr. Ebbers’s crimes cannot be understated,” Cowley said.

Caproni said that she had received numerous letters from shareholders who lost money in the WorldCom collapse. She noted some thought Ebbers should die in jail while others expressed support for releasing the former milkman who built a small Mississippi telephone company into the second-largest U.S. long-distance provider before it fell apart.

The judge pointed out that Ebbers had already served more than a decade in prison and that Congress clearly intended for some prisoners to be released by passing the First Step Act.

“It seems clear that Congress was frustrated by the fact that the Bureau of Prisons was not doing compassionate release,” Caproni said. “Clearly, Congress was sending the message that they do think people should be released.”

WorldCom emerged from bankruptcy as MCI Inc. and was acquired by New York-based Verizon Communications Inc.

Former Galleon Group LLC co-founder Raj Rajaratnam, mastermind of what prosecutors said was one of the largest hedge-fund insider-trading rings in U.S. history, was released in July, a beneficiary of the First Step Act. A request for compassionate release by Bayou Group LLC co-founder Samuel Israel, who faked his suicide and fled after pleading guilty to a $400 million fraud, was denied earlier this month. He is serving a 22-year sentence.\